SACRED REICH Frontman: ‘I Can Confidently Say We Have No Plans To Record’ New Album 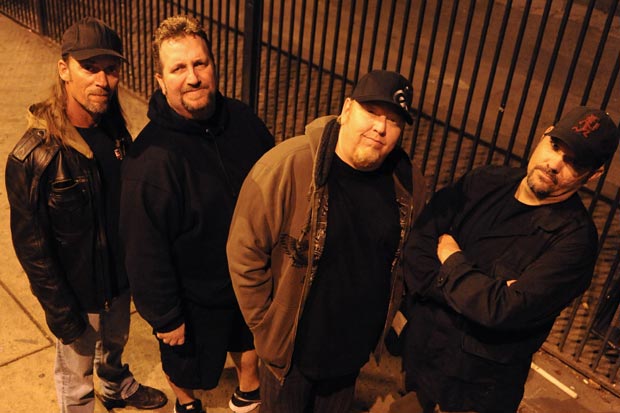 “The answer is we are not going to do a new record. The follow-up question would be ‘Never?’ The follow-up answer is we know better than to say ‘never.’ I never thought we would even be playing any shows. So you just don’t know what the future holds.

“I can confidently say we have no plans to record, no songs to record and no idea what SACRED REICH even would sound like in 2013. We appreciate the fact that any of you even care about hearing a new record.

“We thank each and every one of you for supporting and continuing to support the band. We think it’s amazing that after 25 years, and 16 years since a new record anyone still remembers who we are. So we thank you.

“Enjoy the old records. That’s what we can offer you. If we ever change our minds, you will be the first to know.”

SACRED REICH‘s “Live At Wacken” DVD+CD package was released in North America in November 2012 through Metal Blade. The set contains professionally filmed and recorded footage of the band’s August 4, 2007 performance at the Wacken Open Air festival in Wacken, Germany in front of 60,000 heavy metal fans.

In an interview with MetalRecusants.com, Rind was asked why the band hasn’t made a new studio album after reuniting for sporadic live shows seven years ago. “Our lives are different now,” he said. “I mean, it’s funny… Our old drummer Dave‘s [McClain] in MACHINE HEAD and they’re touring and doing great; they’re very successful. And I said [to the other guys inSACRED REICH recently], I wouldn’t even wanna [get back into a full recording and touring cycle]. I wouldn’t wanna be gone from my family. I have four kids. As much as I like this, as much as I appreciate the fans, what’s important — the family or playing live music? I mean, really?! What’s important — being a dad to my kids? My kids need their dad more than the fans need a new SACRED REICH record. And that’s really the bottom line. It’s a choice. We have a choice to make. What do you wanna do? You have kids now. What are you gonna do — blow it off or are you gonna be their dad? The world will be a better place if I’m [my kids’] dad.”

The remastered edition of SACRED REICH‘s classic 1992 album “Independent” was released as a digipack and jewelbox on March 15, 2010 via Displeased Records. The first 2,500 copies contain a free SACRED REICH patch.

Displeased Records‘ reissue of SACRED REICH‘s classic album “The American Way” came out in February 2009. With upgraded layout, to-the-point remastering plus unreleased pre-production demo bonus tracks and a video clip, this new and improved CD reissue is an essential addition to every thrash metal collection.

“The American Way” was made available in a limited digipak version and standard jewel case version. The first 2,500 copies came with a free logo patch.