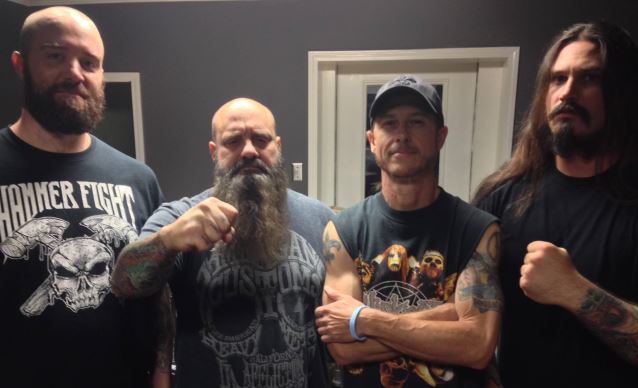 New Orleans sludge metal veterans CROWBAR have entered OCD Recording Studio in their hometown with engineer Duane Simoneaux to begin recording their tenth studio album for a 2014 release. The follow-up to 2010’s “Sever The Wicked Hand” will be mixed by Chris “Zeuss” Harris, who has previously worked with HATEBREED, SOULFLY and SHADOWS FALL, among others.

Windstein exited DOWN in September in order to focus “100%” on CROWBAR. He was replaced in DOWN by the band’s longtime stage manager and HONKY founding guitarist Bobby Landgraf.

“After 22 wonderful years, we are parting ways,” Windstein said. “They will always be my brothers and I wish the best to all of them. We have created some bad-ass music together that we can all look back on and be proud of. All of our great times will never be forgotten.”

With Windstein devoting 100% of his focus on CROWBAR, he is assuring fans that the sky is the limit. He continues: “CROWBAR is my heart and soul. The music is a part of me that I am extremely proud of.

“We are extremely excited to record our 10th full length album and to bring the riffs to as many people as possible on tour.”

CROWBAR recently announced the addition of bassist Jeff Golden to the group’s ranks.

Jeff (pictured all the way left in photo above), 32, is from Bolton, Connecticut, but currently resides in Estero, Florida.

CROWBAR will head out on the road throughout Europe shortly before album release. The band has also been confirmed for the Roadburn, Maryland Death Fest and Hellfest festivals in 2014.