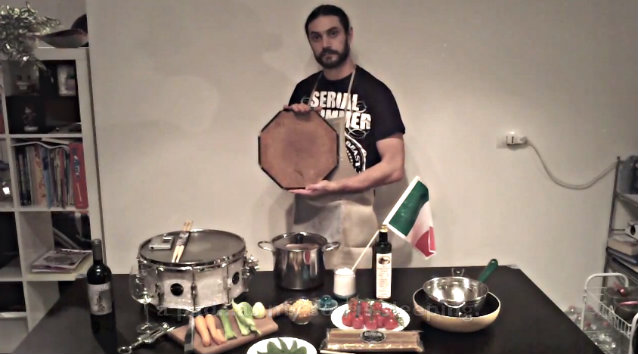 Italian symphonic death metallers FLESHGOD APOCALYPSE have posted a cooking video featuring their drummer, Francesco Paoli. Check out the clip below and pick up some of the products used in the video at FleshgodApocalypse.com.

Commented the band: “We are really proud to officially announce our last addition to our merchandise.

“This is a completely different and pioneering idea driven by the great devotion and respect that we have for our country, Italy and our region, Umbria.

“As Italians, we take much pride in our food and traditions, that’s why we present our artisan ‘pasta.’

“This is a high-quality product, something that you hardly find in foreign countries stores.

“We personally collected the most famous and delicious types to offer to FLESHGOD APOCALYPSE fans as another way to enjoy Italian art.

“As for promotional campaign, and due to high shipping costs of these items, we decided to lower the prices for the next period in order to give the chance to everyone to enjoy these special products.

“Here follows a little clip with our drummer Francesco Paoli showing how to cook it in the proper way.”

In other news, FLESHGOD APOCALYPSE is preparing to film a video for an as-yet-undisclosed song from the band’s latest album, “Labyrinth”. The group states: “It will definitely stand up from the average as we are going to shoot it in one of the most beautiful places in the world, Sicilia. This region was part of Greece right in the era where the ‘Labyrinth Of Knossos’ myth is collocated and our philological research led us there. It will be artistically deep and metaphorically intricate, a real reflection on the sense of our lives.

“Considering how big this matter is and how much we love our art, we decided to invest all the FLESHGOD APOCALYPSE pasta and wine profits in a big production video as well as in the future development of the band.

“Last but not least, we will officially start the HUGE touring campaign in support of our new album, ‘Labyrinth’. We will play all around the world, starting in Europe in January, continuing in Central America, Asia and Oceania in spring and coming back with an incredible tour in North America in the summer.”