METALLICA’s ROBERT TRUJILLO: It Was Our Manager’s Dream For Us To Connect Musically With LANG LANG 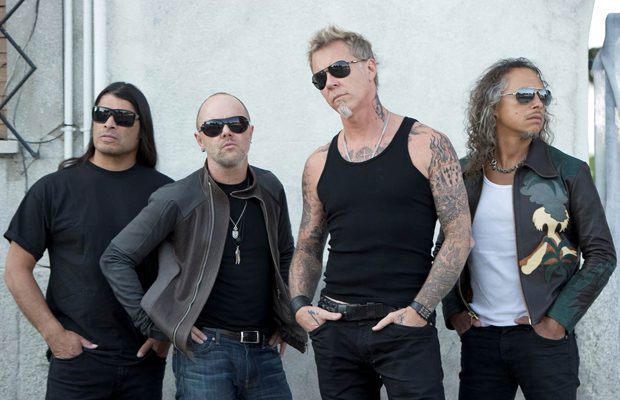 The four members of METALLICA were interviewed by Fuse News senior contributing correspondent Jack Osbourne (Ozzy Osbourne‘s son) on the red carpet at the 56th annual Grammy Awards, which was held last night (January 26) at the Staples Center in Los Angeles. You can watch the chat below.

Asked how METALLICA‘s performance of its classic song “One” with Chinese concert pianist Lang Lang at last night’s ceremony came about, METALLICA guitarist Kirk Hammett said: “Lang Lang is the Grammy ambassador to China, and that had a lot with us hooking up with him.” METALLICA bassist Robert Trujillo added: “And one of our managers, his dream, as well, was for us to unite and connect with him musically, with Lang Lang.”

Prior to last night’s show, METALLICA drummer Lars Ulrich told Artisan News about playing with Lang Lang: “He’s a very talented musician, he’s a very dynamic musician, he projects himself very well. I mean, when he plays, he’s really full of energy and he’s got a lot of kind of showmanship and kind of energy that protrudes off the stage and right into people’s hearts and souls. So I would like to think that it’s a good collaboration.”

Hammett told The Pulse Of Radio that the song’s arrangement highlighted Lang Lang‘s playing without changing the song. “We’re not lightening up the song just for him,” he said. “We’re still hanging onto all the heavy parts and it’s gonna be amazing. He’s just an amazing pianist, and at one point he’s going to be, like, weaving in and out of my guitar solo and playing parts of my guitar solo with me. That’s gonna be interesting. I’ve never, ever experienced that ever before with anyone we’ve ever played with.”

“One” was the first single released from METALLICA‘s 1988 album “…And Justice For All”, becoming the first song from the band to gain substantial commercial radio airplay. It was also the basis for the first music video the group ever did.

METALLICA‘s feature film “Metallica Through The Never” will be released tomorrow (Tuesday, January 28) on Blu-ray, 3-D Blu-ray, DVD and digital.

The film came out last September in 3D IMAX but earned less than $4 million in its U.S. box office run.

METALLICA is currently working on its 10th studio album. The band will emerge next summer for a European tour on which each night’s set list will be chosen online by fans attending the gig.

The band’s traditional 18-song set will include the 17 top voted songs along with a brand new track.

The tour, dubbed the “Metallica by Request” tour, will kick off on May 28 at the Sonisphere festival in Helsinki, Finland and travel across Europe through July 11.