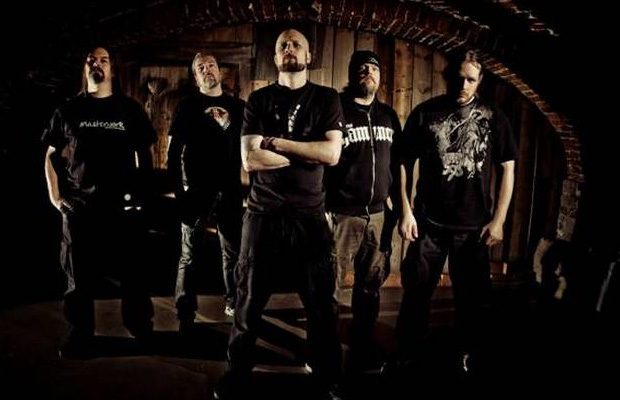 “You try to wrap your head around it but comprehension fails — it’s been twenty-five years since the first official MESHUGGAH release!!! The self-titled (though often referred to as ‘Psykisk Testbild’) EP came out on the small local Umeå label Garageland Records in 1989, making 2014 the big TWO-FIVE for the band!! Hoooly s**t!!

“Who would have thought, huh!? That our small group of young guys would get to — not only write and record our own quirky, deviant style of metal — but that we would still be doing it a quarter century later, making our living off of what we love to do!! Now in our forties, we can’t but look back at it jaw-dropped and baffled at the fact!!

“We always set out to do something new, something different from the music we heard around us — something that would be a challenge to ourselves to write, learn and perform. Something truly unique. Looking back at our career, we feel that we have actually been successful in doing just that!!

“We have for so many years been blessed with a super loyal fan base and a still-growing one at that, allowing us to continue to create freely and without boundaries! For this we sincerely thank all of our fans that have stood by us all this time!!!

“To commemorate this great anniversary, we have a few different cool things coming out in 2014! Those will include, among other things, a few official releases, but as to not completely kill the suspense immediately, we will come back with more info on that during the winter and spring. So keep your eyes and ears peeled for more news on this in the next few months, on our official site.

“One thing we can announce at this time though is that we will be doing a few select ’25th-anniversary’ festival dates both European and North American, out of which one will be us closing the Marquee stage at Graspop [Metal Meeting in Belgium] with a special 25th-anniversary set on Sunday 29th of June! More info on additional dates will soon follow!

“I’ll stop blathering now. Just want to say, from all of us in the band to all people whose support keeps us going strong still: THANK YOU!!! And here’s to another 25!!”

In a recent interview with Australia’s Loud magazine, MESHUGGAH guitarist Mårten Hagström was asked what the next step forward for MESHUGGAH is, creatively. “I have no idea, and I never do,” he said. “And I think that’s a good thing, ’cause people sometimes say that we’re pretty unpredictable, but I don’t really think we are, because we have a sound that’s been with us since at least like the ‘None’ EP (from 1994), that’s very us. [laughs] It doesn’t really change all that much, but it’s still a progression, and what I mean by taking a step forward is that we’re still, we’ve been around now. We’re veterans in this game [laughs], and we’re still having fun with what we do, with experimenting with the music that we want to create. So as long as it feels like we’re making it better, and as long as it feels like we’re doing something that we can at least stand for and be proud of, that’s all that we ask.”

A previously unreleased MESHUGGAH track, “Pitch Black”, is available for free download as a two-track EP from Scion Audio/Visual, (a.k.a. Scion A/V), the in-house record label and lifestyle marketing division of the Scion marque produced by Toyota Motor Corporation for the North American market. In addition to the “Pitch Black” title cut, the EP includes a live recording of the “obZen” song “Dancers To A Discordant System”.