Is FAITH NO MORE Working On New Music? 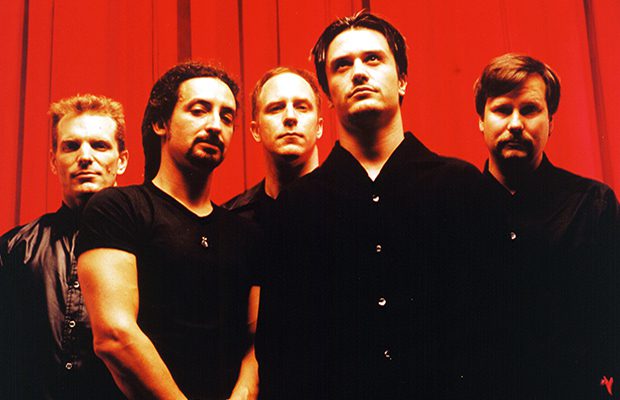 Reactivated influential alt-metal act FAITH NO MORE has hinted at the possibility of new music 17 years after the release of the band’s last LP, “Album Of The Year”.

The group, which made a comeback in June 2009 with a headlining performance at the Brixton Academy in London, England and has played sporadic shows for the past few years, has just launched a new Twitter account and one of the first posts reads as follows: “The reunion thing was fun, but now it’s time to get a little creative.”

FAITH NO MORE will play a number of European summer festival shows beginning on June 28 in Hungary.

Speaking to IHeartGuitarBlog.com in November 2012, FAITH NO MORE singer Mike Patton stated about the possibility of the band releasing any live material from its reunion tours: “Right now, we have no plans whatsoever — live, recording or anything. We’ve done what we set out to do with the reunion, and it’s all great, but it’s just, ‘Let’s see what happens next.’ And I think you need to take a pause to actually reflect on something like that, because otherwise we could just keep playing, and we’re very conscious of overdoing it, y’know, milking material that’s so old. You can only do that for so long, and I feel that we’ve done pretty well. The whole band’s naturally came to this conclusion, so now we’re just sitting tight.”

According to Patton, one of the reasons the FAITH NO MORE reunion didn’t happen sooner is the fact that they wanted to avoid making it feel like a nostalgia thing — like “Here’s FAITH NO MORE again.” “We wanted it to feel fresh and still somehow vital,” he said. “It wasn’t an money grab. It’s funny to say, but we all kind of reconnected, and after quite a long time we all kinda looked at each other and were like, ‘Man, we actually spent half of our lives together.’ It’s interesting to see it through that set of glasses as opposed to the ones you wore back then. I suppose, at least personally speaking, I’ve grown up a lot since then, and I think I approach the music differently, and I felt better about the music than I did then.”