LAMB OF GOD Bassist JOHN CAMPBELL: ‘We Try To Push Ourselves On Every Record’ 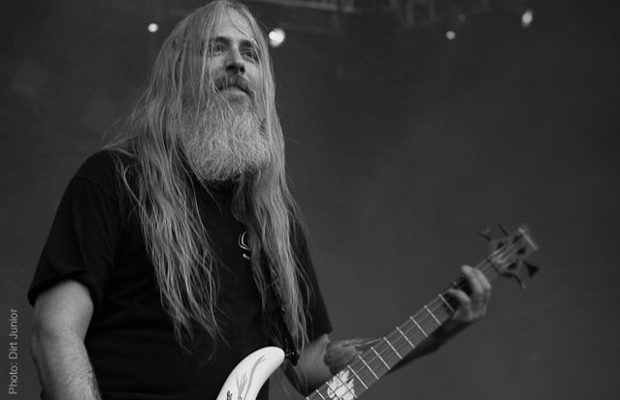 David Devo Oosthuizen of The Metal Review recently conducted an interview with LAMB OF GOD bassist John Campbell. A couple of excerpts from the chat follow below.

The Metal Review: In terms of a new album, I think everybody’s sort of saying that after such a mammoth album [“Resolution”] that dropped in 2011, when is there a hope of some new material? Have you guys been tossing around some new ideas?

John Campbell: We have, and I’m glad that you ask the question on when, and not how we are going to do something better, because that’s a question we ask ourselves every time. Well, when we get together to start discussing the record, start working on the actual music, but probably won’t be until the middle of this year … I keep forgetting we have a New Year.

The Metal Review: Is there anything in terms of the formula you guys use for your records you would want to challenge or change or do differently this time?

John Campbell: We try to push ourselves on every record to kind of step outside what we’ve done before, whilst still maintaining what it is that we do. We’re a heavy metal band. We’re not going to change that now. We’re going to put out music that we feel really good about!

The Metal Review: “As The Palaces Burn” [LAMB OF GOD documentary] is obviously going to be a massive event during March. I mean, we’ve seen on social media it will screen in over 200 locations! That’s huge!

John Campbell: You tell me!

The Metal Review: As a documentary, it is massive exposure, especially for a story that you guys have got to get out there, right?

John Campbell: Yeah, and actually it’s kind of an odd thing! We started this documentary trying to show our fans and the impact of music, specifically our music on people around the world in these far-off fun places! The story kind of changed in the middle of it and the people making the movie are artists in their own right and they were true to telling the story as it unfolded. This is a tragic story, and I would like people not to think we are commodify the story, but it is a documentary about what happened and we think there are a lot of people that would like to see what happened.

The Metal Review: With vinyl making such a huge comeback, what is your view on vinyl as a music format? It is so big again, you would think it is the brand new thing around the block, when,of course, it’s been around forever!

John Campbell: Vinyl definitely has its place! I have a vinyl collection, but I haven’t turned on my record player in a long time, but I have a record player. There are people that absolutely love vinyl and they love a band and they want to see them released on vinyl, so why wouldn’t we?

John Campbell: I think kids should pick up instruments, regardless of what they play, I think they should pick up pencils, brushes, anything! Be creative and be artistic! Whether it’s heavy metal or not!

Read the entire interview at The Metal Review.