METALLICA has joined forces with ESPN and Circuit Of The Americas to assist the victims of the recent floods in Texas by donating all money raised from the sale of downloads of the band’s show at the X Games to the American Red Cross of Central Texas. All formats of the download, including the high definition versions, are being offered at LiveMetallica.com for the very deeply discounted price of $5.00 each through July 15. Click here to pre-order the show.

The historic flooding in Texas and Oklahoma has killed at least 23 people since May 23, when huge amounts of rain fell in the two states. Latest reports say that four people died in the flash floods in Houston, and between 800 and 1,400 homes have been damaged.

METALLICA will perform at the 2015 X-Games, set to take place between June 4 and June 7 in Austin, Texas. METALLICA will headline on June 6. Other artists playing at the extreme sports showcase include Nicki Minaj, Talib Kweli, Kid Ink, PENNYWISE, JOYWAVE and more.

METALLICA frontman James Hetfield told skateboarding legend Tony Hawk in a previously released clip: “It only makes sense that people who grew up on METALLICA are wanting to continue to skate and do the cool things that they do.”

Hetfield continued, “We’re pretty jazzed. We’re excited to get there and X-Games has been going on for a while; it’s about time! The music does something to you. When athletes are already really good and the music takes them to another place, you can’t explain that.”

Bassist Robert Trujillo added, “It always seemed like the skaters and the surfers were really connected to the music of METALLICA… There’s a connection to those type of people. It’s similar energy. You see at these events they’re playing a lot of hard rock metal and punk rock.”

Despite insisting that work has been proceeding on a new album, METALLICA has spent a lot of time outside the studio in the last year, with activities that included a string of European all-request shows last summer, a week-long residency on “The Late Show With Craig Ferguson”, and the Rock In Rio stint.

More festival dates are on the schedule for this summer, including two shows in Montreal and a headlining slot at Lollapalooza in Chicago at the end of July. 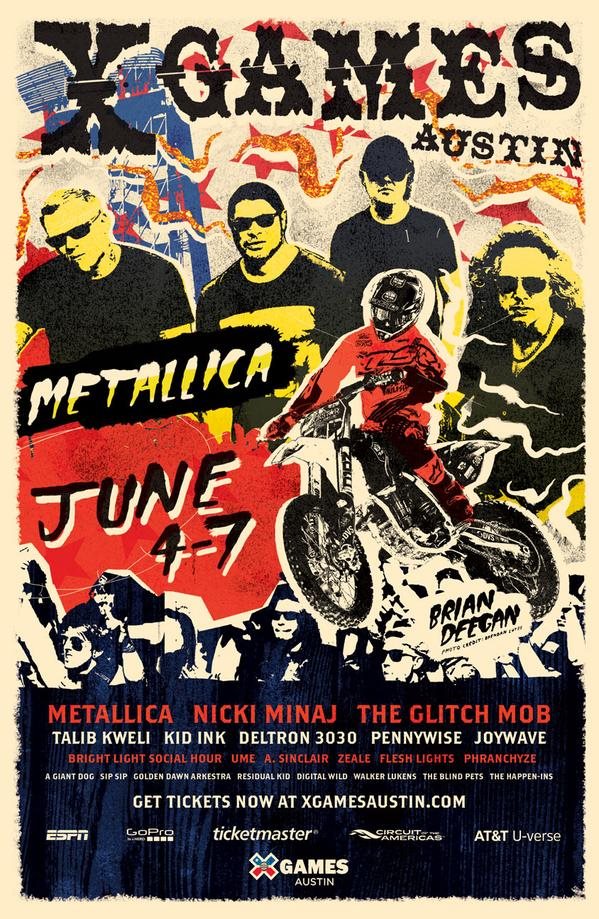