The band is scheduled to perform in Johannesburg on July 1 and Cape Town the following night. The shows are being organized by Witchdoctor Productions, the company that puts on the country’s Witchfest event, which was the target of protests last year.

In an interview set to be broadcast on TeamRock Radio‘s “Republic Of Rock” show this Sunday, March 13, Witchdoctor promoter Shaughn Pieterse says: “What we’re going through is what the metal scene dealt with in the late ’80s and early ’90s, with religious folks challenging them and trying to stop the shows because they disagreed with the opinions and messages of the bands.

“It started early last year with Witchfest 2015. In order to host an event you’ve got to get certain certificates from the council. Every time we made a move to do everything by the book, the councils were getting shot down by so-called Christians and religious protesters.

“Every time we had to move venue we lost the deposit and you keep haemorrhaging money. But you have to make the show happen because if you don’t then they’ve won. You have to take quite a knock to show that they can’t stop you.

“It’s started again with BEHEMOTH and more so with ROTTING CHRIST. But we even accommodated that and spoke to the band and they will be playing in South Africa under an alternative name so as not to offend people in that sense. ROTTING CHRIST was maybe a little bit too far for some people; it’s really in your face.”

There is no word yet what name ROTTING CHRIST will perform under for the South Africa dates.

In a 1998 interview, ROTTING CHRIST mainman Sakis Tolis was asked if he still thought that ROTTING CHRIST was a good name for his band, which formed in 1987. “It’s not a strange question… it’s a pain in the ass for us, you know?” he replied. “Maybe this name doesn’t suit our music very well now, but we keep it to avoid disappointing our old fans, the ones who have followed ROTTING CHRIST all these years, and on the other hand, I think metal music needs extreme names, and this way we show our indifference towards any religion. So we keep this name, and if someone won’t listen to the band [because of the name], we won’t give a shit about him.”

ROTTING CHRIST‘s latest album, “Rituals”, was released on February 12 via Season Of Mist. 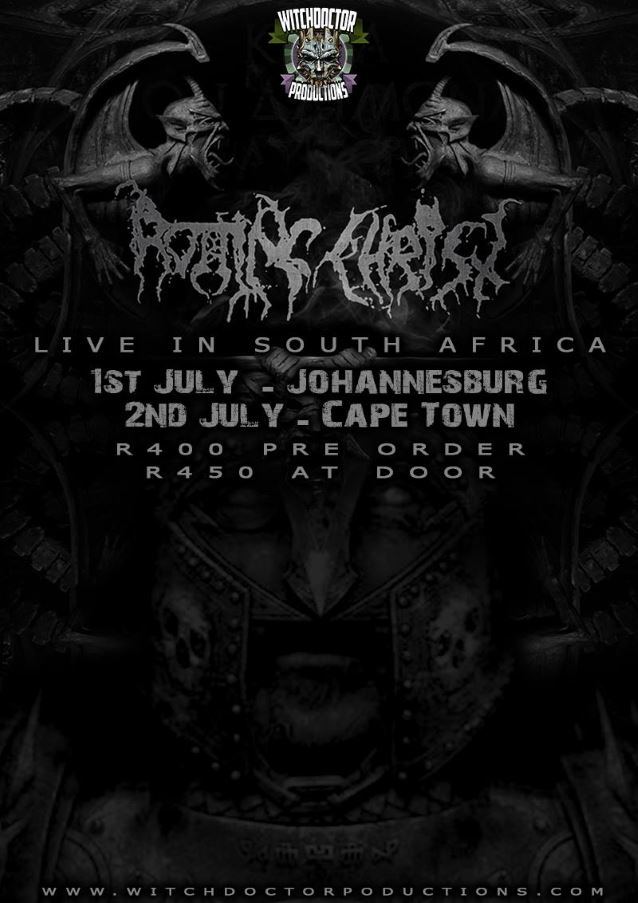