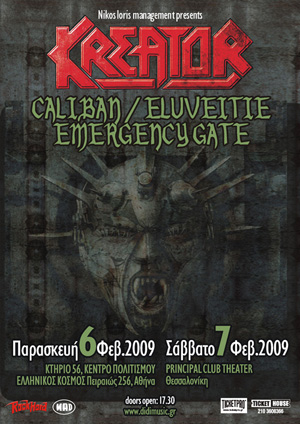 Our memories are still wet from the last time that the German “thrashers” along with our Celtic Frost had waved the “Flag of Hate” upon our heads.The scenery of terror had been set and the “Tormentor” was again in his place.At his side this time were the Calliban, the Eluveitie,and also the Emergency Gate.

Friday 6th of February and the “Politistic center Greek World” was filling with metalheads thirsty for music.The place was already known since a little time before we had enjoyed the Helloween with Gamma Ray.Around 18:30 the gates opened and an hour earlier than expected , nothing else worthy of saying happened that night and all rolled as the producers had planned.After a small sound check the Emergency Gate began to play.The sound was really bad at the beginning but fortunately in the process it became better.The group with a lot of good mood tried to warm up the audience, but there were few that noticed it.

After half an hour they steped down to give their place to Eluveitie.The Swedish were playing smart music trying to harmonise it with the sounds of the violins giving a more folk character to their songs ,without anything extra.It was the urn of the Germans Caliban to step to the stage.The metalcoreads is true that are very loved to our country and many people were there to see them.Unfortunately the result was not the ideal because after a medium appearance and a more medium sound the people that was looking for to see the Kreator rejected really loud the group that was trying desperately to warm up the greek audience.

The clock shows 9:55 and the lights go out.After an hour of delay the gates opened,and 3 groups that didn’t leave the best impressions and many hours of expectations the time that most of the people have gone was finally there.The Kreator welcomed us with two songs of their latest albums “Hordes of chaos” of the homonymous album and the “Warcurse” something expectable since they are on tour for the promotion of their new album.

The audience participated really loud even in the new songs something that proves that the album has been listened enough.The continuity is something really hard to describe .”Extreme aggression”, “Phobia” , “Voices of the dead”, “Enemy of God” and the audience was in a delirium creating a huge “moshpit”.The sound was in a very satisfying level in the whole time of the live of the Kreator. “Destroy what destroys you” , “Pleasure to kill” , “People of the lie”, “Coma of souls”, “The patriarch (intro)”, “Violent revolution” , “Flag of hate”, “Tormentor” were the songs that the group said goodnight and one more live goes to history.

In connection to a years before live it was more or less of the same strength as in the most because the Germans has loved us a lot so that every time they are tring to reward us with excellent concerts.