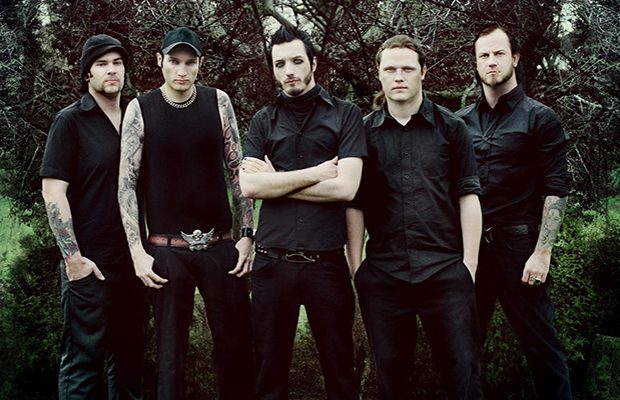 The official lyric video for the song “Yougr Song” from Germany’s CALIBAN can be seen below. The track is taken from the band’s new album, “Ghost Empire”, which is being released on the following dates via Century Media Records:

The CD was produced by by guitarist Marc Görtz in cooperation with Benny Richter.

Said Görtz of the the “Ghost Empire” art, which was created by U.K. artist Chris Lovell: “Another great artist told me about Chris and his art. When I checked out his page, I loved his style and amazing drawings straight away. So I wrote him a message if he would be into designing a t-shirt design for us. It turned out great, so there was no doubt whom to ask for the new album artwork for ‘Ghost Empire’! I told him what the album is about and he said that he would love to do it. It didn’t take long for him to come up with first ideas which were amazing! I hope we can work with him on other projects in the future, he is a great guy and easy to work with and I think the result speaks for itself!”

Added Lovell: “I have been heavily into metal since the age of 12.

“It’s always nice when a band I am a fan of contacts me with a brief for a project.

“I was stoked to read Marc‘s ideas as post-apocalyptic imagery is something I have an obsession with. I grew up loving films like ‘Mad Max’, ‘Cyborg’ and the ‘Fist Of The North Star’ anime. There’s something about destroyed buildings and wastelands that stir my imagination and conjure up all kinds of haunting images in my head. It’s also much more fun and easier to draw ruined buildings than perfect ones!

“Marc and I brainstormed ideas one evening and we came up with lots of elements we liked such as crows, scarecrows, rats etc. I sketched out a very rough concept idea and layout for the basic image. The front and back cover is all in one, so I had a nice wide landscape to work with. I liked the idea of a road on the main cover, leading to what could look like a hive of collapsed skyscrapers and buildings, leaning on each other and climbing into the clouds. On the left side a cliff face leading down to stormy seas and a shore line littered with ship wrecks and capsized boats.

“I wanted the image to look void of human life and haunting.

“I drew out the bulk of the main image in pencil, then used inks and acrylic paint to add depth and highlights. I then scanned the image in and coloured it with a graphics tablet on Photoshop. I drew a number of other elements, like telegraph poles, crows, skulls and rats and scanned them in separately.

“I wanted to be able to experiment with placement and give the band the option to move elements around etc.

“I lost track of how many hours I put into the piece, it all becomes a blur.

“I like to stream horror movies or listen to music and just lose myself in the art I make.

“I have a bit of an obsession with detail and I tend to spend hours tweaking elements on an image people will probably never even notice.

“CALIBAN have been a pleasure to work with. After I had the pleasure of hearing the demos while working on this project it is an honour to have done the artwork for what will be an amazing album!”

CALIBAN‘s eighth studio album, “I Am Nemesis”, entered the German Media Control chart at position No. 21.

“I Am Nemesis” was released in North America on February 28, 2012 via Century Media Records. The CD featured guest appearances by Marcus Bischoff (HEAVEN SHALL BURN) and Mitch Lucker (SUICIDE SILENCE).