Unfortunately, this live report has to start with the reference of the two Greek bands, Silent Rage and Need, cancelling their appearances due to technical reasons. It was really a pity as they are two very good and promising bands and I was eager to watch them live. 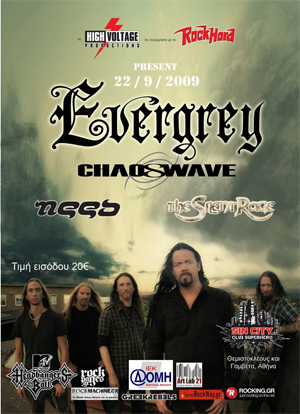 For sure, they could have been a million times better than Chaoswave. The Italian band must have been one of the worst I have seen in my whole lifetime, pointless songs, boring as hell and that was a real test for most fans. I consider that they were really lucky to support a band like Evergrey and play in front of a passionate crowd. They even gained the applause of the fans, they were not lazy or fake, but they were also so out of the point of this concert. And then, about half an hour later, it was time for redemption.

Evergrey entered the stage at about 22:14 and until midnight, they gave an outstanding performance, covering ALL the records (yes, even the first one, ”The Dark Discovery”) and presenting a great line up, which is followed now by ex Stratovarius bassist, Jari Kainulainen. An experienced and talented musician who seemed to enjoy his return to Greece very much. As he told me later, he really loves being a member of Evergrey and feels refreshed a lot.

The first song was ”Fear” from the newest album ”Torn”, followed by ”As I Lie Here Bleeding”. Then came ”Soaked”, another new one, shortly before ”More Than Ever” and ”She Speaks To The Dead” started causing hysteria to the crowd. The band in excellent shape. Tom Englund was unmistaken in all, vocals and guitars, Henrik Danhage filled the gaps great were needed, Rikard Zander was the creator of all atmospheric parts with his humble but straight to the point presence in the keyboards, and Jonas Ekdahl proved his worth just by doing the basics, a great drummer, full of passion and high energy inside him.

One of the highlights was ”Blackened Dawn”, the only track played from the first record, where the singer of Need, one of the bands that didn’t play did the vocals and he really surprised all the members of the band. Way to go bro! From ”Solitude Dominance Tragedy” apart from ”She Speaks To The Dead” they played ”Words Mean Nothing” (a song which always touches sensitive parts inside us), from the godly ”In Search Of Truth” we heard ”The Masterplan” (with a great keyboard intro by Zander, followed by some good guitar work by Danhage) and ”Watching The Skies”, easily the best Evergrey song of all times in my opinion. ”Recreation Day” is an album that many people love and many songs were played: ”As I Lie Here Bleeding”, ”End Of Your Days”, ”I’m Sorry”, ”Blinded” (mass hysteria) and the title track.

None complained for sure. From ”The Inner Circle” they played ”More Than Ever”, ”A Touch Of Blessing” (which was the last song of the night) and the phenomenal instrumental ”When The Walls Go Down, one of the most characteristic compositions of all times, that gave us shivers on our spines once again. ”In Rememberance”, ”Still In The Water” and the title track were presented from ”Monday Morning Apocalypse” and ”Broken Wings”, ”Fear” and ”Soaked” from ”Torn”. Everyone left satisfied, the promoters did a really good job, as the concert was over by midnight, and also the band signed for all fans shortly after the show.

Until next time, we will remember this night as one special night by a special band that loves our country and shows it every time they come here. Tak Som Fan Evergrey! We’ll be waiting for you soon and we know you won’t leave us dissapointed. As usually…