First of all, I would like to say a few things about the Anorimoi band. They are a 6-member comedy-metal group from Athens: Trampakoulas (lead vocals) , Necropethamenos (rhythm lead guitar , brutal vocals) , Qurada (drums) , Tafoplakium (bass) , Satrigiannis (rhythm lead guitar) and Count Vargsteiner (mascot , storyteller).

In 2005 , Anorimoi pass into the market their first album “Kings of Feta”. The greek audience loved them and the number of fans increases day by day .Later on, they created an EP with 5 tracks named “O panisxiros megistanas twn ninja” which was the soundtrack of the homonymous movie. Then, just like that, Warner Music found them! And they created their –in my opinion- best album named “17 Katsarides”.

So, here we are in 2009, and Anorimoi are on tour forwarding their new album “Kala na patheis”. 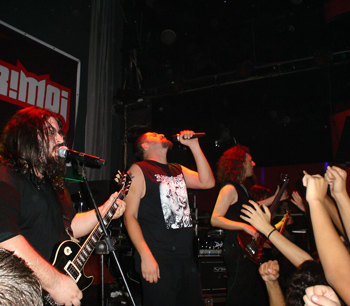 The Anorimoi tour begins Sunday, 11 of October, in Athens at Oxygono club. It was the first time that I would see them live, so I didn’t know what to expect!

The opening was made by Audioblast, a very talented hardcore metal band from Athens. With their well-played music, they make the audience head bang all around. I loved them and I’m really looking forward to see them again.

By that hour, the club was jam-packed with people waiting to see Anorimoi on stage! Finally, they made their entrance starting with a power song named “o pappous kolise aids”. We made big laughs when the mascot of the group –Count Vargsteiner- went onstage dressed like a priest while Trampakoulas was singing the “Rasoforos Kerveros song”. The best masquerade of Count was at the “Dikano” song. He was dressed like an old woman holding a plastic carbine made for kids!

They continued the show with their greatest hits like “Keftedaki”,”666″,Sos ap”to WC”, “Kariola”, “Sto proto rantevou” and the best songs from their new album: “San zitianos” , “Xeiroteri mera ever” , “Kama sutra” and of course the homonymous “Kala na patheis”. The audience was in delirium. It was a two hours and a half head banging.

We left the club exhausted but full of satisfaction. They were in great form, even though they had some problems with the sound, they gave their best to please us. 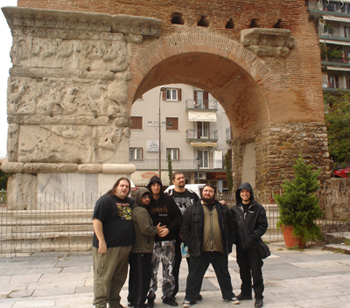 But! Time is running and I had to get prepared for a road trip with Anorimoi at Thessaloniki city for the live performance they scheduled on Friday, 16 of October at Eightball club.

We arrived all together at Thessaloniki early that afternoon. We left our suitcases in the hotel rooms and we went straight to Eightball for sound checking. Unfortunately, the sound check lasted a big longer and people were gathering outside the club waiting for the doors to open.

Here, the live opening was made by God”s Desire, a 3-member band from Thessaloniki. They clearly have big influences from Anorimoi , but they are still in a very amateur level. I didn’t like their performance at all. The sound wasn’t good and I barely heard their voices.

The audience”s mood got so much better when Anorimoi went on stage. Trampakoulas was holding his camera, recording the reactions and cheering of the crowd! The club was stifling full of people (again)! They kept, pretty much, the same set list. The correspondence of the audience was beyond imagination. We were all enjoying ourselves, dancing all around and head bang all the time!

The biggest surprise for Anorimoi themselves was that their friends DemaximaM from Crete, traveled so many miles to see and honor them. Trampakoulas, invited them on stage to sing together, while Nick from Demaximam was stage diving offering us a priceless show!

In the end, all the fans were shouting “We want more”, but Anorimoi couldn’t fulfill their wish. I must say, I enjoyed them more than in Athens! 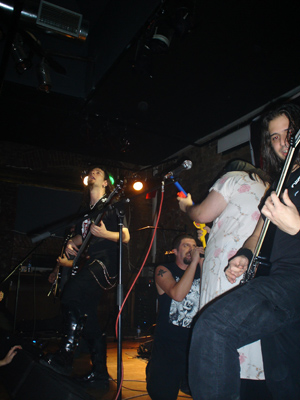 Time is running, and we have to wake up early and continue the tour. Next stop is the city of Larisa at Stage club.

This time, the support group is a -4 member-hardcore metal band from Karditsa, named Show Your Face. Their performance was great! Their strong vocals, their riffs, their bass, their drums… everything was awesome. They love so much their music, it is really obvious. They played supporting great names like Septic Flesh, Homo Iratus, Omen, and Sodom. It”s a very promising band and I’m sure they will reach the top!

And here we are, waiting for the Anorimoi band to come onstage. We started bouncing and head bang with the rhythms of “Kalos” song and “O papous kolise aids”. Things got hotter with “Kamikazi” song, “panisxiros megistanas twn ninja” and “Spase to spyri”. Unfortunately, the sound wasn’t good enough. The band made remarks many times to the sound engineer during the show. Anorimoi were not satisfied with these conditions at all.

There was a group of fans in the center of the club, shouting funny slogans to the band making us laugh. While playing, Anorimoi were having fun with each other, taking funny poses and telling jokes after the end of each song.

The live ended with their top songs “Tendympohs, Kariola, Sto proto rantevou”, and Trampakoulas got of stage and went to the fans that hugged him and raised him to their hands shouting and cheering! This was the best highlight of the night! So, exhausted as we were, we went back to our hotel and the next day we took the road back to Athens.

The days passed quickly, and the day for the live in Patra had come! I arrived there in the afternoon. I found them at their hotel’s café bar. So we sat all together chatting about the upcoming live. It was the only live that there wouldn’t be any support band. Only the Anorimoi. So we went to Stone club on foot. We saw a lot of people waiting for the doors to open.

The great minus is that this club wasn’t meant for live performances. It hasn’t got a uniform size. Nevertheless, the fans were so excited that Anorimoi came to their city at last, so we were all in a very good mood! They made many jokes and conversations with some guys from the audience. They were head banging and dancing around a lot and singing all together.

I saved my beer from dropping at least 3 times! After the end of the live, the crowd was shouting “we want more”, and it was the first time that Anorimoi played one more song!! And, what a surprise!? It was from Manowar , the “Pleasure Slave”!

So, Anorimoi left from Patra with the promise to their fans that they will come back soon! 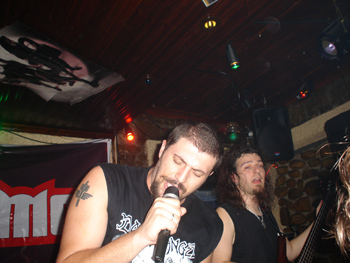 It’s Saturday, 24 of October, and we are heading to Agrinio city at Dewars club for the last live of the “Kala na pathete tour”. I was at the sound checking. Everything was working properly so we went to our hotel rooms early to take a nap and be fresh and ready for the live later that day.

The truth is that we were all sure that only a few people would come. We didn”t know what to expect. We didn”t even know if there where any fans of Anorimoi at Agrinio city. But… we were totally wrong. The club was so full that we could barely breathe.

The sound was perfect, the audience was excited. The only minus is that they didn”t know the songs of Anorimoi”s new album, but I saw that they loved them. Trampakoulas and Necropethamenos said many jokes and sang with the audience.

Afther the live, we stayed in the club, taking pictures and drinking shots made by Tafoplakium and Qurada. We really didn”t know what was inside these drinks. And I think that we will never find out!
And the Anorimoi tour ends here, with our digital cameras full of videos and photographs, and our mind full of great memories we lived all together these 2 weeks.

Closing this report, I would like to thank all the Anorimoi members for their company and their friendship. Trampakoula: Thank you for trusting me with the merch-job, Necropethamene: Thank you for nothing, Qurada: thanks for the scratch you made on my car man, Tafoplakium: may the Satan be with you and far away from me. Satrigiannis: I want this limited edition Marlboro case! Thank you! And at last a big THANK YOU to one of my best friends Count Vargsteiner for everything he did for me.