Having already the chance to see Haggard’s amazing and unique live experience, at the same venue back in 2008, I started my day with flashbacks and thus with great expectations for this concert, as it was their 20th year celebration show. 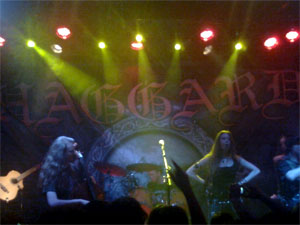 Arriving outside the venue, about ten minutes before the scheduled time of Haggard’s appearance, I faced a small crowd waiting patiently. Entering the venue,though, the scene did not change that much. A few people here and there, waiting while listening to -mostly- German folk Metal bands! A good preparation for such concert one might say…Well, I could have said so myself, but after having to deal with the big beginning delay, I can surely say that in a way, this backin’ track became totally annoying and boring!

It was about one and a half hour later (that is 23:00), when the nine members took their place on stage, the rest of them didn’t make it due to volcano eruption and the flight cancellations. Having a nice setlist, Haggard made it clear to everyone, that they can do this kind of thing better than anyone. Beginning with tracks from their latest release “Tales Of Ithiria” then moving to “And thou..” the went back and forth in their entire career, combining songs that captured the celebration mood. They even played some special treats, such as excerpts from Slayer’s “South of Heaven” and Helloween’s “Dr.Stein” which made even more friendly the whole atmosphere in the venue. The performance was amazing and I could say even more captivating than the previous show. Candles, stage, fires etc. everything well placed and Asis Nasseri’s/ Claudio Quarta walk amongst the crowd while playing, gave it all a big entertaining character. Some minor sound problems though, made it somehow irritating to attend and focus on both music and performance.

In its all, I should say that, this show was satisfing but I don’t know if it would have been even better with all the performing members,without the delay, the folk metal braiwash before the show and the sound problems… Oh, and the crowd, well they could have been more in number! They once were more for sure! On the other hand, it was Tuesday and I guess that was the whole deal with it. Hope next time everything will work clockwise. Thank you Haggard!