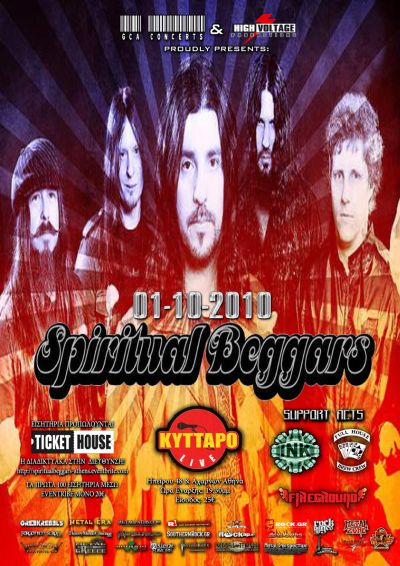 It’s been seven long years since the quintet from Sweden visited Greece for the last time, during the ”On Fire” tour. It was the third time in our country and with third different singer. First was in 2000 with the colossal Spice on vocals, second was in 2003 with JB, who is also singer and guitar player in Grand Magus and now they visited Athens with Apollo Papathanasio, who is known for his vocal duties in Firewind with a lot of success and he proved that he was worth the place of the singer in Beggars.

First band to play were Beyond Perception. A rather groovy band, playing pure American stoner style, without some core references missing. Imagine in parts listening to Lamb Of God playing slow and heavy without outbursts for example. Very powerful on the stage, with a great sound on their side making things easier and better for them. Very tight as a group, with the singer drinking as needed to spit the lyrics with a very special and lazy style that had the right response to the crowd. They played somehow less than 40 minutes and left knowing that they gave it all. Well done!

Next was Full House Brew Crew. A band in the style and veins of Black Label Society, especially Zakk Wylde must be the singer’s idol. Despite a problem in the beginning of the show where power fell off but was instantly fixed (it must have been world record, in other circumstance the whole gig could be cancelled, so praises to the promoters of the show), they managed to deliver dirty full blown rock ‘n’ roll, having fans wearing their jackets in the BLS style (patches in front and back). The singer apart from being a great guitar player with some cool shredding and even better solos, reminded me of James Hetfield vocally in some parts. The future is theirs, just work hard as you do guys.

It was time for the headliners to make us shake heads and bodies. After a short intro, they burst into headbanging with ”Left Brain Ambassadors” from the best Spiritual Beggars release ”Ad Astra” and they show us from the beginning that we’re going to have something more than just great time. The sound is unbelievable and the band shows that came here to deliver full energy and honest playing. Apollo seems as if he was many years in the band. Confident, direct and very good in the old songs, especially the ones of the JB era.

Michael Amott on the left side of the stage was building riffs and solos made from a diferrent season, he seems very relaxed compared to the times I’ve seen him with Arch Enemy, where the mood is totally different. Sharlee D’Angelo remains one of the best bassists in metal, having also all the ingredients to act as a frontman where needed. He doesn’t only grow in width but also status. Ludwig Witt is so unmistakeable behind the drum kit. He doesn’t have to smash everything or show that he can play fast or hard. He does his part and completes a powerful rhythm section in the best possible way.

They continued playing songs from all the albums (except the first self-titled EP) with the weight being given on the latest great release ”Return To Zero” with ”Star Born”, ”Concrete Horizon”, ”The Chaos Of Rebirth” and ”We Are Free” being some of the highlights, accompanied by songs from ”Demons” such as ”Throwing Your Life Away” and ”One Man Army”. Also we had stuff from ”On Fire” like ”Street Fighting Saviours” and ”Fools Gold” and of course some more from ”Ad Astra”, including ”Wonderful World” and ”Mantra”.

The last part of the set was amazing with ”Magic Spell” from ”Another Way To Shine” and ”Euphoria” from ”Mantra III” closing the gig. After leaving our necks on the ground, with cold blood we could say that some classics missed, especially ”Angel Of Betrayal” and ”Killing Time”. Nevertheless, it was a very professional performance that left only a few ones complaining about Apollos’s performance and many songs representing the new album. I only left Per Wiberg for the end. This guy is not a musician, he is the epitome of what could be called as the friend we all would like to have. Filling the songs with excellent themes, headbanging like he’s 18 and acting cool drinking his beer while not playing. We all hope it won’t take another seven years until next time. Per Aspera Ad Astra!