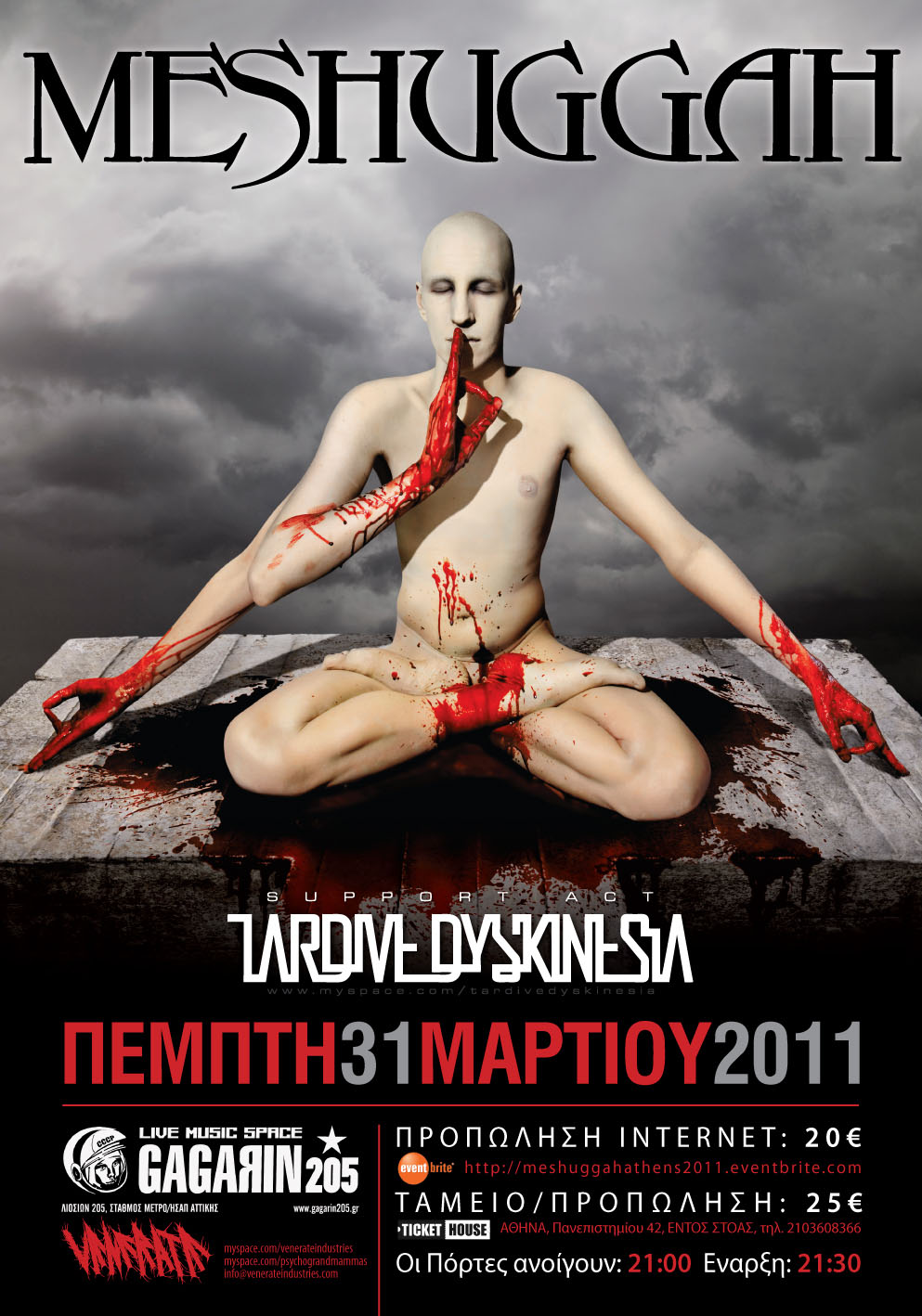 One of my favourite bands of all times are the mighty Meshuggah from Sweden. I consider them to be the most different band of all times in metal music, always having and developing their own style of playing through the years. The first years I was getting to know them, I was trying as much as I could to convince people about their worth but it always seemed like i was collapsing into a massive wall of doubt. To be honest, they never played the most easy to listen to music, their style was never what we call commercial and radio friendly. Adding to all these the fact that a feeling of claustrophobia might come around you while trying to understand them, it always made matters worse for untrained years. Three years ago, a Meshuggah live in Greece seemed like an English joke. This time, the dream finally became reality.

Tardive Dyskinesia were the ideal band to open the show. Not only because they worship them as gods and their style in many parts sounds familiar, but also because they are an ongoing force that devastates everyone who catches them live. Once again they played about forty minutes with a slightly different setlist, compared to the rest times I have seen them live, with tracks none expected to listen to, something that didn’t seem to annoy everyone. The sound was great and their sound engineer must be praised for this, all sounded like they were playing next to our ears. The singer’s statement ”It is needless to say we’ve shitted our pants from joy, opening for Meshuggah” says more than everything about how they felt. My favourite Greek band for sure, how couldn’t they be? More is yet to come, it’s only a matter of time to be recognized abroad.

Meshuggah finally managed to give a full show in Greece, the 2008 gig was something they personally wanted to forget. Not because they didn’t play well (the opposite), but because they had many sound problems and didn’t have much time to show their skills (the same thing happened last summer in Brutal Assault festival in Czech Republic when I saw them again). This time everything worked as a Swiss clock and the five cyborgs entered the stage with ”Rational Gaze”. Everyone was trying to adapt to the whole feeling, but it was kinda difficult to try and stay still, while seeing especially Marten Hagstrom and Dick Lovgren banging as maniacs. Tomas Haake is a drum legend, showing that you can sound technical even if you play simple rhythms, combined by profound skills of course.

”Bleed” was the next one and I see younger fans getting extremely obsessed around me. These two opening songs are the most known to their newest fans, so you can understand that the crowd has lost the game even before it started. Two tracks from ”ObZen” follow, being ”Electric Red” and ”Pravus” that make so clear the fact that their last album so far has the ideal songs to be played live, that’s why they are touring almost three years for it. ”Stengah” was a great surprise and the whole Gagarin Club is filled with groove and low frequencies. It’s simply unbelievable how the guitar and bass riffs are connected in such a way that make you feel like you suffocate. ”Combustion” was simply the spark that set the place on fire, with people banging, moshing, dancing and in general going out of control. Half the set is off and it seems there’s no turning back.

”Lethargica” was the track in which vocalist Jens Kidman put out his cell phone to capture the crowd, which he encourages to follow the rhythm. Especially on the final break, the whole place goes up and down, until ”Sane” represents their most violent release ever, being ”Chaosphere. We all try not to lose our minds but it is completely in vain. The sound gets even better as time passes by and all of them bang their asses out, except Fredrik Thordendahl, who tries to stay focused to his hallucinative solos as much as he can. Kidman’s voice is twice better than in the albums and then follows a ”Nothing” suite represented by ”Perpetual Black Second” and ”Straws Pulled At Random”. This is the part where Haake makes all jaws drop and the band continues in order to give us the final blow that will send us to the point of no return.

No matter how many years will pass by and how many albums they will release, there’s no Meshuggah song such as ”Future Breed Machine”. They play it even heavier and groovy and after eleven songs and seventy minutes they wave goodbye to us in pure praise. Just like I said before, a dream came true because many people were longing for a full set, knowing what the band could do if all things were set right. It was a live experience we’ll remember for years. What made me happier is that the club was almost filled up, and it is about time for this band to start have a loyal fan base in Greece. It took them many years to establish themselves, which was not their purpose of course, but in the end, what matters is the fact that honesty and personality flows from them in the highest possible rate. What makes me sad is that there are still people ignoring this gigantic force of music that never stayed the same and the fact that once again, they didn’t play ”New Millennium Cyanide Christ”. Maybe on summer in Hellfest, who knows?