The Iridium on Broadway, New York, is definitely not your typical rock-venue. And you’re not likely to see your favorite rock musicians, such as Steve Stevens (Billy Idol) and Sebastian Bach in a small jazz-club that only takes about 200 people (and they are all seated at long tables)! 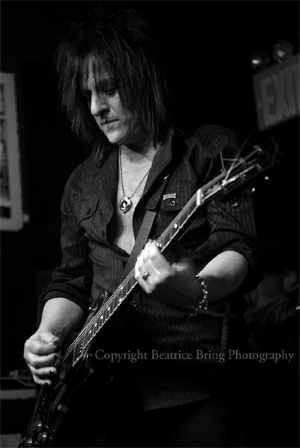 At the same time, it was the best way to experience good musicians, cause it was so unpretentious. Steve and his band, consisting of three experienced musicians (Pete Thorn – guitar, Neil Jason – bass and Anton Fig – drums – I suggest you Google them to see what I mean by “experienced”. One of them even played with John Lennon back in the day) walked out on stage and opened the evening with a Freeway jam.

Seconds after that, the guest-singer of the evening was introduced: Sebastian Bach. He entered the stage with a big smile and it was obvious that he loved being a part of this. His rendition of Robin Trower’s “Day Of The Eagle” was certainly very “Bach-ish”, as he got into the song with his well-known energetic headbanging and strong voice. You would think that as it was Steve Stevens’ gig, there would be a whole bunch of Billy Idol songs on the setlist, but there was only one, “Rebel Yell”. Sebastian willingly admitted that the song was hard for him to sing as he didn’t normally use his lower vocal range. Steve convinced him that he could handle the song just fine, and as the song followed, I agree. I would actually love to hear Sebastian sing more in the lower ranges. It suits him, shows a totally different side of him as a vocalist.

The songs that we were served along with our cheesecakes at the Iridium, were covers, but very unusual and unpredictable ones. These guys had the luxury of choosing songs they like, regardless what their crowd might like – so they were bold enough to pick songs you wouldn’t normally expect. If a band covers AC/DC, you’d expect to hear “TNT” or “Back In Black”. These guys picked “Beating Around The Bush”. And if you wanted to hear “something by Led Zeppelin” you’d probably think that the band would play “Whole Lotta Love” or the dreaded Stairway…. Instead, they pulled “Dazed and Confused” out of their sleeve! I can’t help but being impressed. They didn’t play it safe, and it kind of shows their status when they don’t have to. 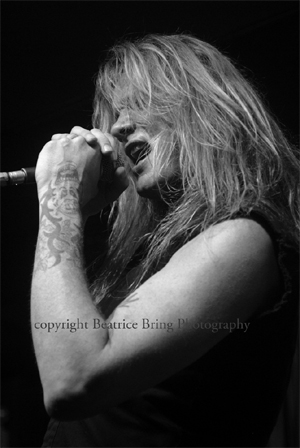 Steve’s acoustic solo was nothing but brilliant. There’s nothing I love more than listening to a talented musician playing not only technically flawless, but also with his whole heart and soul. He’s one of the few guitarists today who’s as skilled at playing the acoustic guitar, as he is playing an electric guitar. That makes Steve unique.

The two last songs were the only ones where Sebastian didn’t need a guy from the audience to hold the lyrics for him, because the tape kept falling off when he tried to stick it to the monitor. The classic Skid Row-hit “I Remember You” shows a different Sebastian than the one I remember from the early Skid Row days. He would often sing this out of key back in the day, but this shows a mature Bach with a complete control of his voice. Fantastic.

Last song blew the roof off the jazz-club – “Youth Gone Wild”, Bach was jumping up on the tables, having people sing along (among those, yours truly…). They left the small but amazed audience wanting more and that’s just the way true professionals do it.

The evening still lingers, it was worth the trip across the Atlantic, no doubt about it!