Every time there is a concert going on, most of the times, afterwards, we complain about the smaller-than-expected crowd. So, this Saturday night, at a live of four Greek underground bands and in a venue that, even though it’s historic, it’s not in the safest region of Athens, especially nowadays, my expectations were a bit low. But the almost 300 persons gathered showed me that, if the band does a decent and honest job, the fans will support it nevertheless.

First to appear on stage, with twenty minutes delay, were Layil. This band exists since 2004 and has gone through three name changes and a break up, but now they are 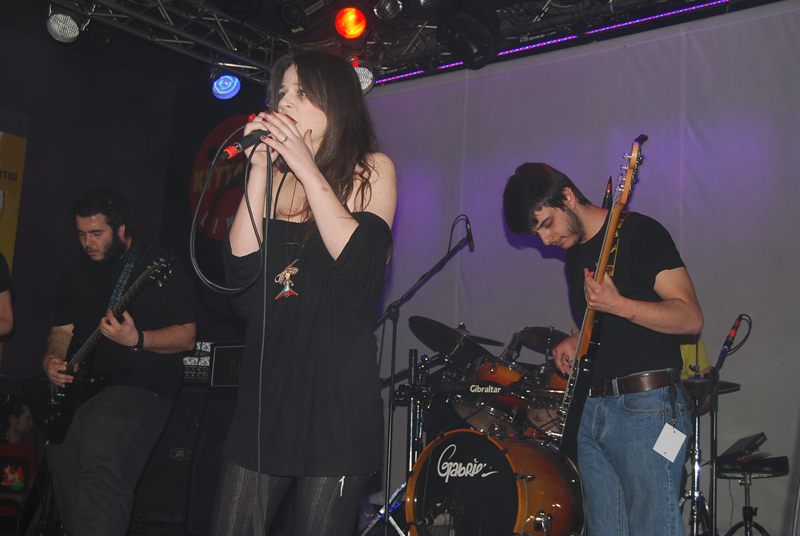 back on schedule and started with this live performance. Their progressive music style mixes with high-pitched female vocals. Unfortunately for the singer, the sound was poor, the guitars were too loud and her voice was completely lost. And this problem continued for the rest of the night. Apart from that, for approximately forty minutes, we heard the band’s compositions, well played, but it was clear that Layil haven’t had the chance to play live enough times to gain confidence. I expected them to communicate more with the crowd and to present their work, as many might not be familiar with them. They did a good job, though, warming up the audience.

Next in line were Humayrah. For me, and I think for many others they were the surprise of the night. For their opening they chose a part from Meshuggah’s “Bleed” and this got everyone going. For the following forty-five minutes we heard some nice aggressive, groove metal, 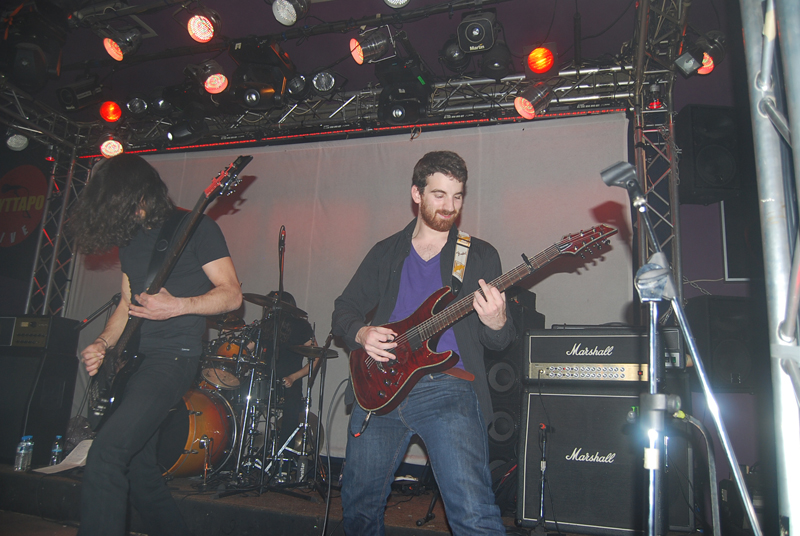 in the likes of Machine Head. The band was very cheerful, constantly headbanging and in good communication with the crowd below, and maybe the fact that they had their own audience helped them. The sound got better and this time, the brutal vocals were heard very well. Somewhere towards the ending of their setlist, they did a cover of Opeth’s “Master’s Apprentice”, which proved to be a good move. This, performance was a definite success for Humayrah, and my guess is that they won many fans over. And they sure need them, as they are in the process of recording their debut album at Devasoundz Studios.

At 21:30 an intro started playing and the members of Meden Agan took the stage. Last one appeared Iliana. 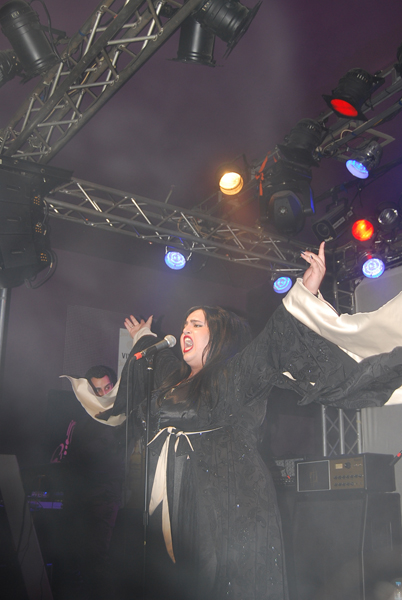 The first thing that I noticed was that the drummer looked off place. Whereas everyone was dressed in suits, the drummer was normally dressed. It seems that there were some problems between the band and the original drummer, so Phillip from One Of These Days replaced him, and he replaced him really well. The rest of the band was very well rehearsed and the voice of Iliana was magnificent. The only problem was that the lower vocals, as well as the male brutal ones, weren’t heard clearly, as it happened with Layil. The setlist of Meden Agan was based on their recently released debut “Erevos Aenaon” and the fans were responding to Iliana’s every signal, applauding and yelling, and there even were some fierce headbangers. We also heard a cover of Epica’s “Sensorium” and Korn’s “Thoughtless”. But one of the most beautiful moments of this night was when Maxi Nil, the singer of Visions Of Atlantis, joined Iliana to sing Within Temptation’s “Somewhere”, only with the accompaniment of keyboards. Another highlight was “Erevos Aenaon”, the best-known song from Meden Agan, as well as “Nemesis”, and we even saw a mosh pit forming. Meden Agan closed their set with “Black Sky” and left the stage to the headliners.

We didn’t have to wait long. It was nearly 23:00 when Dimlight greeted the crowd and started powerfully with “Masters Of Our Faith” from the second 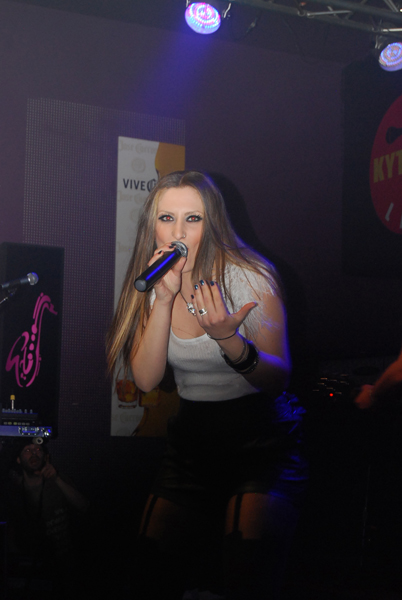 full-length album, “Psychosynthesis”, which is ready to be released. The band was flying. Sanna’s voice was in great shape and as a front-woman she did her best, jumping up and down, headbanging and talking to the fans. Invoker’s brutal vocals were amazing and the drumming of Peter, the newest member of the family of Dimlight, was outstanding. The pre-recorded orchestral parts, bass and backing vocals enriched the music. The sound was good enough, but the guitars were a bit too loud and there was again a small problem that didn’t let Sanna’s softer singing be heard. There were also a few technical problems at first, but they were minor and they were fixed quickly. The songs of the setlist were altering between “Psychosynthesis” and  their debut album, “Obtenebration”. None of the new ones were left out. But the old ones are loved ones to the fans, who started singing along with Sanna. “Path Of Ritual”, “R.I.D.”, and “Absence Of Light” literally shook the crowd. Dimlight had a few other surprises in store for us. When it was time for “Mind’s Game” Sanna invited Iliana on stage for a beautiful duet. During “Stillborne Debris” Xaralampos Paritsis, the violinist who cooperated with Dimlight on “Psychosynthesis”, came on stage and performed. And for “Unify” and “Cardinal Sin”, Stelios Mauromitis took 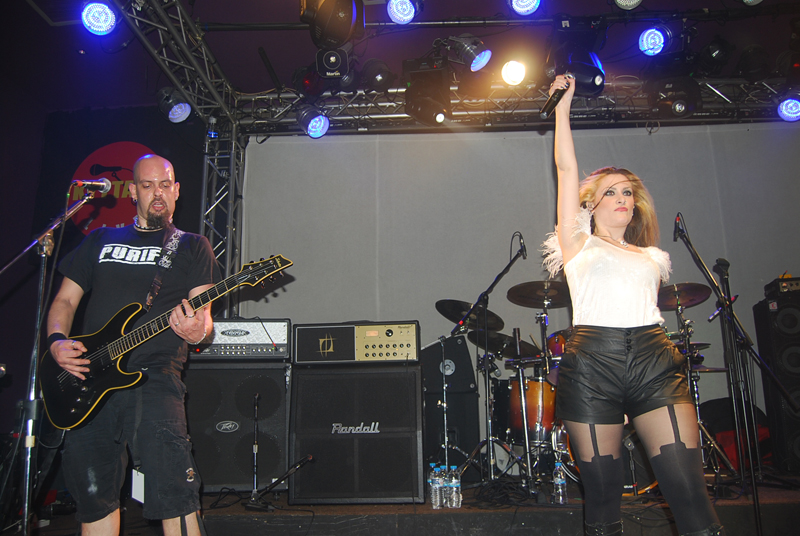 over the guitar from Invoker. And that was not it. Dimlight, being professionals as they should, they even had fireworks. After nearly eighty minutes, they closed their show with “Dark Emotion” and with fire.

Saturday night in the end exceeded my expectations. I had lots of fun, as most of the attendants I am sure. As for the bands, they gave their best selves and gained the respect of the fans for doing that. We all know what the Greek metal scene is like, but I also know that if you try hard, you will be rewarded eventually. So guys, keep up the good work.