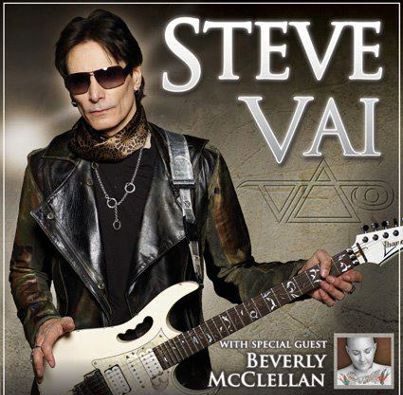 As you all probably know Steve Vai is one of the most important guitarists and musicians in the music industry. I’ve never seen him live until I learned that he was coming for two shows in Thessaloniki and Athens, so I took the opportunity to finally see him on stage.

The show should have started at 20:30 with Beverly McClellan as an opening act, who I didn’t manage to see due to problems I had during my journey to Thessaloniki because the road was closed for maintenance. When I arrived at Principal Club Theater Beverly McClellan had already finished her show and the crowd was waiting for Steve Vai to come up on stage.

It was about 21:15 when we heard the first guitar notes, and then the band showed up with Steve Vai entering last with his eccentric look making the crowd go nuts with his absolute playing and movement on stage. Watching an almost instrumental show is hard for most of people but in this case you could see people from different ages, families, young children, musicians and older persons who attended the show to enjoy a wonderful music experience. I couldn’t count how many people were inside the club but i estimate that there were at least 600 people who attended the show. Dave Weiner was responsible for the rhythm section and made an acoustic guitar solo during the show taken from his latest acoustic album ‘A Collection Of Short Stories: Vol. 1’ as Steve Vai mentioned. Philip Bynoe was digging and slapping the bass filling even more the sound of the band. Deborah Henson–Conant made the difference playing some magical melodies on the harp and even made a fantastic harp solo. Jeremy Colson was hitting the drums with full force and played an amazing solo on his drum set, after playing some acoustic songs along with the band, with some kind of strange drum kit he had.

They played classic songs from all the albums including the new album ‘The Story of Light’. Every time Steve Vai touched his guitar beautiful melodies filled the room. Flawless playing, ultimate professionalism and kindness are the things you can immediately observe in this passionate musician. He had continuous contact with the crowd even when he didn’t speak on the microphone, just with an eye glance. He was making jokes about himself, the band and the crowd and thanked the audience continuously throughout the concert showing how humble and gentle person he is. He even called one girl and a guy from the audience to help him compose a song on the spot. Another interesting observation was his wear and guitar changing from song to song, with highlight a uniform, guitar and mask full of lights and lasers on his hands creating an unbelievable audiovisual scene.

During every song the crowd was other times watching with surprise and other times went completely crazy, making Vai feel welcome. They closed the set with highlight of the show ‘For The Love Of God’ which in my opinion is one of the best guitar instrumental songs ever written and after a while played the encore ‘Taurus Bulba’. It was a few minutes to midnight when Steve Vai thanked us for one last time and left the stage closing a night full of emotions, music and magic moments. A show you shouldn’t miss if there’s anyone near your hometown.

Setlist:
Intro
Racing The World
Velorum
Band Intro
Building The Church
Tender Surrender
Gravity Storm
Dave Weiner Solo
Weeping China Doll
The Moon And I
The Animal
Whispering A Prayer
The Audience Is Listening
Deborah Henson-Conant Harp Solo
Rescue Me Or Bury Me
Sisters
Treasure Island (With The Beast)
Salamanders In The Sun
Pusa Road
Jeremy Colson Drum Solo
The Ultra Zone
Frank
Build Me A Song
For The Love Of God