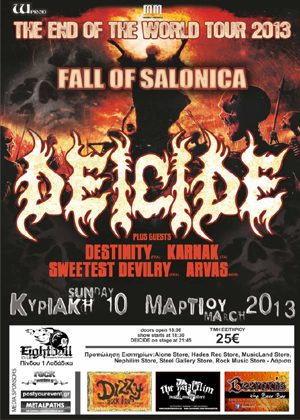 The night of the concert was closing at hand. Well not exactly the night because this live gig was starting at 18:30. Yes the sun was setting but it was sunny still. Anyway the fourth time in Greece for the death metal veterans Deicide was near.

I manage to get to the venue few minutes before the end of Arvas, the first support band. And I couldn’t see them at all, because I was trying to settle my schedule for interviewing Deicide. An interview that unfortunately didn’t occur in the end for many different reasons I cannot analyze them here. It was clear that I wasn’t meant to watch the only old fashioned Norwegian black metal band of the night.

Still waiting to take my turn on interviewing Steve Asheim, the second support band takes the stage. After many problems with their strings – as I could see and realized they managed to break three strings the exact moment before they play – Sweetest Devilry start to unleash their blackened death metal. I must apologize because I could not watch them neither through their whole set. The reasons were my anxiety for the interview and the creepy sound. So far no impressions of the live gig were there to describe.

As my patience was ending and the interview seemed to be cancelled – and for this I blame mostly myself – the third and in my opinion the best of the supports came on stage. The French Destinity and their modern melodic death metal were feeling the venue of Eightball Club. The sound was better compared with the two others bands. Yet not as good as it could get. The moments where the samples (some keyboards and voices) should been heard, were disastrous for their sound. In general the quintet was giving their 100% of themselves on stage and the few (still) people in the crowd seem to enjoy them. Some tracks I stand out were “Black Sun Rising” and “My Senseless Theory”. And with their music you could understand the evil that In Flames did.

The real warm up for our ears were the quartet Karnak from Italy. Their brutal death metal was good yet the sound didn’t get much better. The drums were trigged to a point that was irritating. But they were brutal enough and with tons of technical death metal and they were trying to persuade the crowd to go into a moshpit. Especially their bassist Lorenzo seemed to scold us because death metal is all about the headbanging and moshpit. And he was right. Most of the people present at the moment were like they have visited a theater. Just stood there looking. Their music without being something extraordinary was a really good warm up for our necks. Highlights of their setlist, I think, were “Jaws Of Megatherion” and “Melody Of Death”.

It wasn’t 22:00 yet and on stage, after Karnak, four figures well known to us took their places. A “hello” from the frontman of Deicide, Glen Benton, and the night started immediately with the renowned intro and “Homage For Satan”. The crowd in just a few seconds was tripled in numbers and everyone went crazy listening to “Dead By Dawn” continuing the setlist without a pause. Deicide keep on going without a pause for another two songs. “Once Upon The Cross” and “Scars Of The Crucifix” left us all with our tongues hanging for water and gasping for air. Now the break was necessary for us and for the musicians. Mr. Benton seemed in very good mood and after a sip of water he introduces us to the next song. “When Satan Rules His World” it was, and the crowd going on in moshing again and singing along. The almost 100 individuals declare that they were present with each song and the atmosphere was great this time. And I say this time because the last time Deicide were in Greece, many were complaining about everything on their performance. The night of 10th of March was nowhere near compared to their last show. Each member of Deicide was looking in great mood and the sound magically turned to be excellent. Of course the contribution of an early suggestion of Benton to the sound engineer to increase the volume of the vocals was a really good tip.

The show was kept on going and everyone was happy. After two songs from Deicide’s latest release “To Hell With God” we witnessed a nice surprise. One of the guys on the first row of the audience was screaming in the face of Glen Benton a request. “Oblivious To Evil” was the song that was next, thanks to the screams of this dude. I don’t know if it was on the setlist of the show. And again the venue was upside down because of the moshpit.

That was a great highlight of the night. Unfortunately we had two bad moments. Both were ended pretty quickly though. At some point of the gig some fuse went out on the pedals – if I am correct – of Kevin Quirion and the stage technician solve it in a few minutes. The other one was because the vocalist of Arvas, as I was told, was drunk enough to piss off Benton. He had taken a place right upfront of Glen shouting and stretching his hands in his face all the time. The incident was over when Benton called up for the tour manager to take the guy away from him.

The show was on again without anyone remembering these accidents. And it was a hell of a show. Benton giving picks to the audience almost all night. Jack Owen unleashing his riffs with his bohemian attitude and Kevin Quirion do his part excellent, while backing up with his vocals. He did excellent without a doubt as he had been a substitute for Benton on plenty of shows. And last but not least the machine that is called Steve Asheim. What can you say about this guy?

The show ended exactly as it started. With a lot of energy and moshpit. The last two songs were from the first same titled album of Deicide. “Sacrificial Suicide” and “Lunatic Of God’s Creation” were the songs to give the closure of a great night. There wouldn’t be an encore but I believe that no one was left complaining about this evening with Deicide. The setlist was about 80 minutes but it was so fulfilling that I couldn’t ask for more. Till next time do not stop being oblivious to evil, because Deicide will be near as exactly the last 24 years are.

SETLIST:
1. Homage For Satan
2. Dead By Dawn
3. Once Upon The Cross
4. Scars Of The Crucifix
5. When Satan Rules His World
6. Serpents Of The Light
7. Save Your
8. Hang In Agony Until You Are Dead
9. Oblivious To Evil
10. Conviction
11. Blame It On God
12. Children Of The Underworld
13. Witness Of Death
14. Desecration
15. Into The Darkness You Go
16. How Can Call Yourself A God
17. Sacrificial Suicide
18. Lunatic Of God’s Creation