Deicide
In The Minds Of Evil 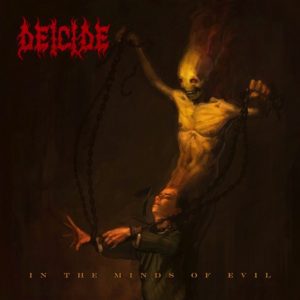 It’s been a long period since I thought Deicide could blow me off with a new album and I started thinking this may never happen again, especially with the last two albums of the band, ‘’Til Death Do Us Part’’ and ‘’To Hell With God’’, where I remembered their downfall during their ‘’Insineratehymn’’ and ‘’In Torment In Hell’’ days. So if we put things down, the only shining period for them since 1997 and ‘’Serpents Of The Light’’ was the release of two very good albums after 2004, ‘’Scars Of The Crucifix’’ and ‘’The Stench Of Redemption’’, where they showed signs of inspiration, despite a more melodic approach (without losing in brutality of course). With Ralph Santola out of the band and Kevin Quirion from Order Of Ennead taking his place, I was more than curious to see how things would turn up for them.

Strange as it may seem, ‘’In The Minds Of Evil’’ is the best album of the band the last sixteen years and surely the best after the departure of the Hoffmann brothers, who managed to release a very good album with the reformed Amon last year. I think the band must have reconsidered a lot of things and one of the first must have been to sound simple and essential in every note. The album is thrashy enough in structure, making it flow easily and the tracks become addictive for the listener from the very first time. When the title track enters, you will feel such surprise with the freshness pouring from the speakers, that you may think it’s a band playing like Deicide and not Deicide themselves. As soon as Glen Benton’s voice comes to solve the question, you may start feeling this is going to be way too good.

Glen gives his best possible performance as always, Deicide might have sounded dull, boring or uninspired sometimes through the years, but Benton was always in the front line, together with his other brother in crime since the beginning of the band, drummer Steve Asheim, who also smashes the drum kit once more to show why he’s still one of the best drummers ever to have played in a metal band, no matter what the genre is. The real deal of the album is the feeling that experience and hard work took over all possible problems that were inside the band and if I consider that Kevin Quirion also helped in the compositions as much as the others did, then we have the triumph of a team work that offers us a release to make us think of a great continuation for the American death metallers (as long as it may last).

Of course I couldn’t leave Jack Owen out of all this, as he becomes a very strong part of this release and has generally helped Deicide with his presence the last eight years. The Owen/Quirion duo offers some amazing riffs and solos that sound clear and brutal enough to make us reconsider our opinion about the once decayed Deicide and put them strongly back in the first frontline of death metal. Counting out Immolation’s last releases which surpass one another, this must be the best death metal album released from a great American band the latest years. Threatening, mature, perfectly structured and with the feeling of the grower in each listening, ‘’In The Minds Of Evil’’ can stand proudly next to ‘’Serpents Of The Light’’ in the second row of the Deicide albums (don’t forget that the first three albums of the band can never be reproduced, nor lose the significance of their releases).

With their ups and downs as many bands do occasionally, Deicide give us a great reason to smile (it seems absurd for a band like them to create such feelings, but here it is, in front of your ears). In the end of 2013, ‘’In The Minds Of Evil’’ is one of these albums that can totally blow a possible top-20 list like the one I did and didn’t have time to change before publishing, as it would easily be a part of it. Glen Benton and co. may feel proud for this album, which hopefully may be a new start for the death metal veterans, not to become as great as they were in the early to mid ‘90s, but at least keep their name clean and high in status until one day they decide to split up. I think this day may not come soon enough, but a new album like ‘’In The Minds Of Evil’’, would be more than welcome.