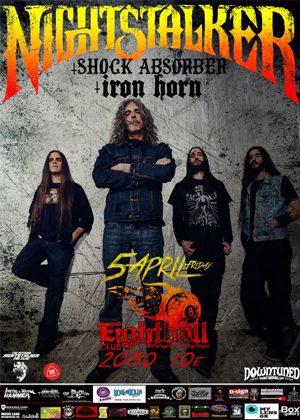 Friday night and Nightstalker return to Thessaloniki just a few months after their latest performance. Having released their new critically acclaimed album “Dead Rock Commandos”, Nightstalker need no introductions and have nothing to prove when it comes to live shows. They have nothing to prove since everyone knows that Nightstalker’s gigs turn to be real holocausts. So, taking this for granted, and, in combination with the pretty cheap ticket (only 10€!), the Eightball Live Stage filled once again by fans who expect nothing less than a true rock party!

First band on stage was Iron Horn. Featuring Savvas Mistiliadis, the singer of Drunkard, Iron Horn is a newly formed stoner band from Thessaloniki having just about 2 weeks of existence! Obviously inspired by bands such as Down and Motorhead, they played a short set-list having not the best possible sound. The ace of the band is definitely the growling vocals of Savvas, but, it’s not possible to draw reliable conclusions from the debut show of a band. I’m looking forward to seeing them in the future.

Next band was Shock Absorber from Thessaloniki as well and it’s been my first time hearing of them. Playing songs from their new album and some older ones, their groovy-stoner sound was good enough to warm up the crowd. I have to admit that some of their songs were really catchy and gained my attention reminding me of Pantera in some parts, especially the Anselmo-like vocals.

It’s time for Nightstalker. I’ve been impatiently waiting for them since I had so many years to see them live and specifically since the Metal Healing Festival in 2007! I still don’t know how I missed them so many times, cause I really had a lot of opportunities during the last years! Anyway, it’s been around 23:00 or something when the heavy-rock legends hit the stage with “Go Get Some”, a song from their new album “Dead Rock Commandos”. The sound was definitely MUCH better than before so any concerns I had flew away! The next song is the self-titled “Dead Rock Commandos” and the party has started for good. Everybody was jumping and singing the refrain proving the success of the new album! Next is “One Million Broken Promises” from the last album again and that’s how the band put an end to the new songs giving the baton to the older stuff. “Enough Is Not Enough” from the “Superfreak” album made the start with the self-titled song to be following in a row. 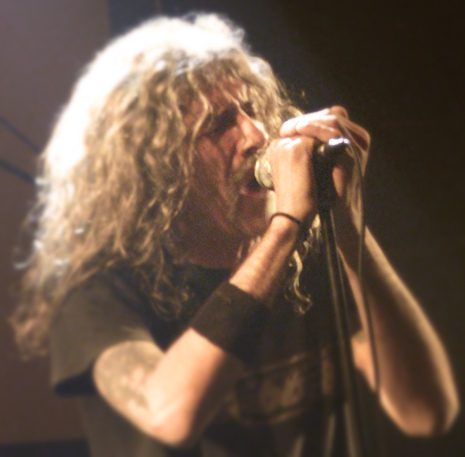 Argy doesn’t stop to dance giving the rhythm to the whole venue which can’t deny the invitation. It’s really hard to describe the atmosphere in words but everyone who has seen Nightstalker before can understand better what I’m trying to write here! “Line”, “Voodoo U Do” and “Iron” were the representatives from the “Just A Burn” record until we dive deeper into the past and “The Ritual”-era with “Galactic Revolution” and “Never Know” ! Honoring their entire discography, they couldn’t leave the “Use” record out of the party and that’s how “Brainmaker”, self-titled “Use” and “Freakland” came to complete this job! Next songs are “All Around” and “Just A Burn” in a row and what happened reminded me the chaos in bigger festivals when Black Sabbath or AC/DC are on stage! And I’m not fuckin’ exaggerating, Nightstalker are living legends and true rock-stars, no doubt! “Mad Prophet” from “Side FX” LP was the unexpected surprise of the night and then “The Underdog” seemed to be the last song of the night…or not?

Nighstalker left the stage and the crowd was rhythmically shouting their name expecting them to return on stage. That’s what happened just a few minutes later with Argy hitting the stage and with the same rhythm as the fans shouting “Oe Oe Oe…Nightstalker” he started shouting “Baby God is Dead, Baby God Is Dead…Nightstalker” and that was a great and special intro for the encore and “Baby God Is Dead” which really burned the venue! “Trigger Happy” and “Keep Knockin’” followed to complete this rockin’ holocaust!

Really, I have no more to say! Nightstalker know how to rock and they rock hard! I’m really proud of them and I swear, it won’t take so long again until next time! Definitely a night to remember!