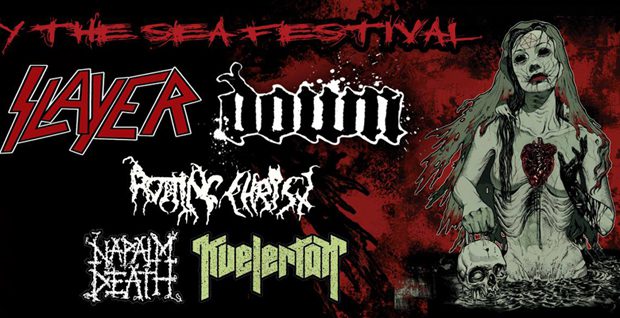 It was 1st of July. A new festival that we truly hope and wish to be established and continue in the future was about to begin. By arriving at Plateia Nerou where the festival took place, I got amazed by the wonderful sea-side place having the historically Averof ship in the background just opposite from the live-stage. Definitely one of the most beautiful places for an open-air festival that I have been before!

But let’s get to the chase! When we arrived Kvelertak were already on stage and we should have missed the first two tracks. If you read Metalpaths.com you definitely know our sympathy for the Norwegian. Second time in Greece, they had enough audience and gave their best to rock the fuck out under the hot sun. Erlend was plowing the stage up and down spitting his guts out in every song while he also didn’t afraid to do stage-diving! Playing songs from both their two albums they had overall a good appearance with only negatives the sun and the not that good sound.

It’s time for Napalm Death to hit the stage and the British need no introductions. I was really expecting their appearance cause I haven’t seen them before (how the fuck did that happen?). However I couldn’t enjoy the show and unfortunately I can’t even describe it because I would injustice the Napalms. It started to blow and that had as a result a really bad sound which in comparison with some technical problems made impossible for me to enjoy the show…

The evening went on with Rotting Christ, the older generation of Greek metal leading the charge for the next one hour or so. Moshpits, chants and sing alongs were part of the show as the audience was being thundered by classic anthems such as “Athanatoi Este” (dedicated to the fans as usual), “King Of A Stellar War“, “Χαος Γένετο (The Sign Of Prime Creation)”, “Noctis Era“, “Transform All Suffering Into Plagues“, “Non Serviam” as well as songs off “Κατα Τον Δαίμονα Εαυτού” (which sounded even greater live), them being “In Yumen Xibalba” and the title track whipping the crowd into a frenzy. Sakis Tolis didn’t forget to thank the fans each and every time between songs for their support to Rotting Christ and metal in general throughout the years. Another amazing performance by a legendary band.

It’s almost 21:00 or something and the legendary band from Louisiana hit the stage! Yes, it’s Down, probably the heaviest band in the world! (ok, after Black Sabbath). Phil Anselmo introduce themselves to the crowd and the opener song is “Eyes Of The South” ! Holy fuck! The sound is great and they sound so heavy! Next song is “Witchripper” from the new EP of the band and “There’s Something On My Side” from “II: A Bustle in Your Hedgerow” release returns to the older stuff. It’s been my first time watching Phil on stage and he really blew me away. I can’t take my eyes from him. He is really more than what I was expecting. He really knows how to make the crowd go wild, his snarl-y voice with which you probably have grown up with makes you shudder and he generally gives the 101% of himself on stage! He is a true heavy metal icon! No doubt!

Next song is dedicated to Dimebag Darrell and it’s called “Lifer” ! What happened can’t be described in words… Phil is over-excited hitting his head with his microphone while legendary Kirk Windstein stands by his side playing a bunch of heavy riffs! “Lysergik Funeral Procession”, “Ghosts Along The Mississippi” and “Pillars Of Eternity” are following until Phil introduce us to the first ever Down song; “Temptation Wings”! “Underneath Everything” and “Hail The Leaf” were next until “Stone The Crow” – probably the most famous song of the band – came to burn everything with the fans singing the lyrics louder than ever! Last song for Down was “Bury Me In Smoke” and I really have nothing to say! Just hit it at youtube and watch yourself how this Americans can rock the fuckin out! Definitely a superb performance!

The hour draws near for us to welcome one of the trademarks US Thrash metal bands: Slayer. Few are left to be said for their influence on the extreme metal genre in general. However, the weight of the loss of main guitar player Jeff Hanneman due to liver failure 2 months ago, seemed unbearable for most bands. Kerry King chose to make a tribute tour for Jeff including Gary Holt of Thrash legends Exodus on guitar and drummer on the 90s works of Slayer Paul Bostaph. Will this be the final tour for Slayer? Only hell knows. The fans expected nothing less than the classic balls-out kick-ass Slayer performance.

The lights go down and “World Painted Blood” kicks in from the same-titled latest album and the crowd goes insane. A circle of death forms behind the first 4-5 rows and things go off to a great start. No mercy shown whatsoever (pun intended) and in comes “Disciple” with the all time classic chant “GOD HATES US ALL! GOD HATES US ALL!” sang loud and proud by the crowd. Next question by Tom Araya “Are you ready for war? WAAAAAAAR ENSEMBLE!” I think you probably can imagine the chaos in the mosh-pit by the sound of that scream! The writer definitely felt it on his own body since the mosh-pit looked more like a World War II battlefield. That situation went on with “Hate Worldwide” showing that latest Slayer releases contain songs that proudly stand next to their classics at gigs. Time to headbang with a pleasant surprise from “Hell Awaits”: AT DAWN THEY SLEEP! One of the fullest Slayer songs ever, snapping some necks in its path with the guest performance of Phil Anselmo in the chorus. We kept on headbanging with “Mandatory Suicide” and its amazing intro riff lead the charge. After that comes one of the ultimate Slayer classics and the writer’s all time favorite “Chemical Warfare” and even though “gods on the throne must be watching from hell waiting the mass genocide” those hellthrashing demons in the pit were not ready to die!!

The mayhem continues with “Postmortem” and the well known build up in the end making up a big tornado in the pit which continued in “Die By The Sword“. Time for singing along and headbanging in one of the sickest storytelling Slayer songs “Dead Skin Mask” and its sick main guitar riff. “Hallowed Point” brought the moshpit back to life being one of the most pleasant surprises of the evening, with its killer mid section riff built to destroy everything. “Seasons In The Abyss” makes us headbang hard once more and lose our mind with its addictively haunting chorus and some of the most melodic Slayer solos ever written! Then comes Phil Anselmo once more on stage stating how much he loves Slayer and covered “Fucking Hostile” by Pantera with them (as Kerry King did when Pantera were still around). The crowd went absolutely nuts since Greece never lived a Pantera concert before so just that was something.

The show ends with 3 definitive classics: “South Of Heaven” (do you really need a description here?) and the mosh classics “Angel Of Death” and “Raining Blood” with the videowall showing the Heineken logo with Hanneman‘s name on it as a tribute to the fallen guitarist and the crowd destroying the place once more. And thus ended the show, less than what we expected in terms of time schedule. We wanted more that’s for sure but not unsatisfied as far as the writer is concerned. Slayer should make a tribute tour for Jeff since there’s no need to record something else as a band (nothing will be the same without him truth be told) and call it a day. Just name it differently and keep on making music if you like. As for the overall organization it was exceptional and let’s hope Detox keeps on making such events even better. Support such efforts as much as you can.