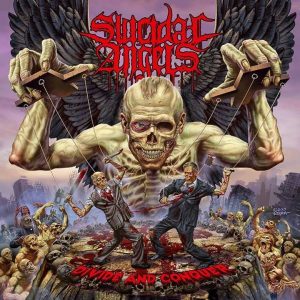 Time for me to review one of my favourite bands of the latest years from my favourite metal genre. Suicidal Angels came like a battering ram seven years ago with their crushing debut ‘’Eternal Domination’’ to awaken the sleepy thrash metal with their energetic approach of this style. The Kreator influences couldn’t be hidden and this was only the beginning, as the big bang came with the second album ‘’Sanctify The Darkness’’, where everyone was caught by surprise and the next big thing in thrash was official and undeniable. Years have passed, albums followed, departures and arrivals took place inside the band (good luck to those who left and to the ones that just came in the band), but the Athenian force remains unstoppable and as it seems, it will continue on this rhythm until the last one who questions them is convinced about how great they are.

The Suicidal Angels phenomenon is global and must be taught in courses considering how you will get what you deserve through hard work, endless dedication and ready to sacrifice even your own country and the ones you love in order to do things more professionally. At the moment speaking, the band has moved outside Greece, something they’ve been considering doing many years ago, and I think this will prove to be a crucial move, as they’ll do things the way they want without any obstacles. The new album which is the reason why we analyze their course so far, will allow them to reach even greater audience, and a large opportunity to convince even the American market that the best thrash metal band currently comes from Europe and it’s about time to do their own headline tour. It comes with the great title ‘’Divide And Conquer’’ and will prove to be as important as the previous four albums were.

Continuing from where ‘’Bloodbath’’ stopped, ‘’Divide And Conquer’’ is even more mature, well played and with a straight look in the future of the band. It’s the first album for new guitarist Chris, who proves to be a perfect fit for the Angels and shows his abilities at once. This release is the longest they’ve done so far, as it reaches fifty minutes in duration. Some will surely not approve of this, but the band seems to not give a flying fuck about that. From the ten tracks of the album, seven of them last twenty seven minutes and three of them last twenty three, showing that if the guys want to express in larger durations, they’ll simply do it great. For example, ‘’Seed Of Evil’’ could be the new ‘’Chaos (The Curse Is Burning)’’, a great groovy track that will create mosh pits but will also prove how much they have evolved (it may also remind you of ‘’Among The Living’’ by Anthrax at some parts).

The other two large tracks, ‘’Control The Twisted Mind’’ and the closing ‘’White Wizzard’’ simply show that if the band is able of writing such material, then the next albums will become even better, once they’ve adapted this style deeper inside their music. As far as the fast tracks are concerned, the band plays without opponent there (well, maybe their good friends Legion Of The Damned are the only ones who can also write such stuff). From the beginning of ‘’Marching Over Blood’’, to the title track that kicks ass, the show goes on with ‘’In The Grave’’, the band’s new video (with the great changes and the outburst in the end). Nick does the best vocals of his life, more certain and lyric-spitting than ever, Orfeas also plays the most essential and mature drums in a Suicidal Angels album so far and the new guitarist is a win/win situation.

‘’Divide And Conquer’’ was a big bet for the band. If some people thought they could take the sound of ‘’Bloodbath’’ and evolve it much more and better, then they can claim they believed in the band so much and the band proved them right. If justice is done quickly for the guys, then they’ll soon see everyone admit they’re the best in what they do and one of the best and more trustworthy metal bands out there despite the genre. I feel proud that I can consider myself a fan of them and a friend also, since I’ve been always telling them that there is no limit in what they can do. That’s what I also believe with this album, a great bet that is won but still they can do better and offer more. Even when they reach their tenth album, we’ll be telling people the same story, as there’s nothing they can’t do or achieve with the way they work. Congratulations one more time for the best album I’ve heard for 2014 so far and good luck to your new beginning boys.