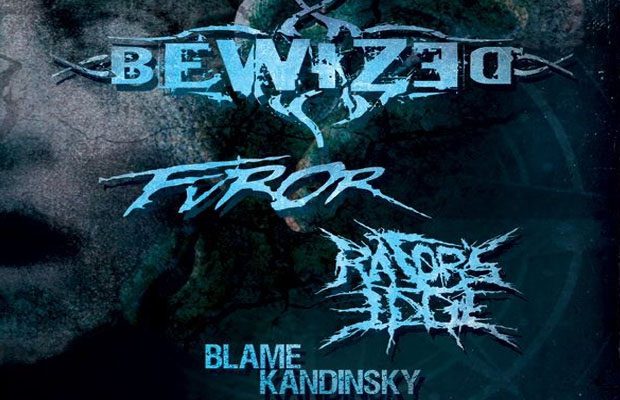 A day after Jarboe’s gig, I set on visiting the centre of Athens once again to witness the gig of four modern sounding bands that have a lot to offer to the Greek Scene. The coming of Bewized from Thessaloniki to Athens to present their new album was a good reason for fans to enter the show and there must have been around a hundred people that attended the show, despite the fact that there should be much more according to facebook postings (that means that if you don’t want to go to a gig, DON’T say you’re attending it). The gig started with a small delay of one hour but was worth the wait as the sound was very good for all the bands until the end (some small problems here and there were getting fixed immediately).

Blame Kandinsky is a band that plays full of nerves, especially the vocalist turned red from screaming and you could see it in his face that he was in a very passionate state, the drummer was very neurotic too and hit everything in front of him. Very good presence on the scene and a style that reminded me a lot of The Dillinger Escape Plan at many parts. They played seven songs that lasted a little more than half an hour and they included a distorted cover of ‘’Break On Through’’ by The Doors (nice try though, that’s the meaning of a cover). The gig started well enough and after ten minutes, the second band came in.

Razors Edge had a small problem of the last moment, but were helped by the guitarist of Harsh Demise who did the second guitar part. At the current moment they’ve found a new guitarist that will help them compose new material. They were very passionate and neurotic too, with their vocalist awaking the crowd and their style reaching the sound of some ‘’deathcore’’ bands like Suicide Silence with some Pantera based riffing, they also dedicated their performance to the memory of Dimebag Darrell. They played a little less than half an hour, as the helping guitarist they had didn’t have the time to learn all the material. After a small break, the third band came to the stage.

Furor are a very experienced band that I saw for the first time. They came to the stage with the air of the ‘’veterans’’ of the day and had a very good sound (despite some problems with the guitar). They played ten tracks if I counted right and their performance lasted around forty minutes. Lousy noisedealers as they are, they made the crowd respond to their insane beatdowns and set the club on fire, a very good performance from the band, I’d like them to play a little more but the time was passing and Bewized had to come on stage immediately. In case you haven’t heard of them so far, it’s about time doing it, they sound much more tied than the first time I heard of them.

Bewized came to present their second album ‘’Undead Legacy’’ and started straight enough to play new songs. Their fully American style made the few fans that remained on the club go nuts and for the next hour, they played twelve (or was it thirteen?) tracks which showed the level of their skills and professionalism. After a fix in the vocals’ sound, the band took the fans by the hand and made them have a great time. In terms of playing, their drummer is an extraordinary player that hits everything and plays so comfortably that you feel he’s going to go on beating the shit out of the skins for the next two, three or four hours. It’s like boosting the others to give themselves 101% to what they do. He’s too humble to admit he does so, but his bandmates and road crew claimed he’s the driving force of the band.

The guys also played a cover of Trivium’s ‘’In Waves’’ that was played incredibly nice and it was the big surprise of the night for sure. I’d like to tell those who left that they really missed a great performance and that when you pay for something you’re supposed to support, you have to do it until the end. There were people working the next day but they stayed until the end to show their true support to the four bands. I wish we’ll have such events in the future and I bet that all these bands are going to evolve much more and offer something good to our country’s scene, time will tell of course, but the first signs are more than positive. Hails to the fans that stayed until the end of the show, especially to the ones that walked their way to their homes.