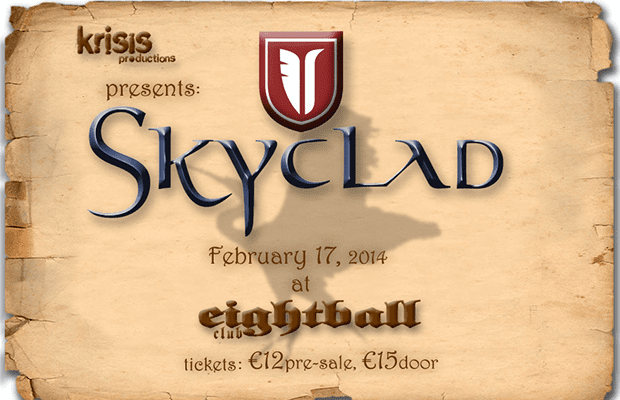 The day was Monday and the start of the week wasn’t the usual one. There aren’t many live gigs that take place on a weekday and this gig was really a special one. Skyclad would appear on Thessaloniki after 16 years from their latest gig in Greece. Back then I was a diehard fan of death metal and wouldn’t care much for a heavy metal gig, although I did appreciate the music of Skyclad. And of course all of my friends laughed at me because it was a great gig and as they said: “It was more a party than a live concert”. I did regret it, even the band themselves was in awe of that night as they have stated.

So the time was right and I was about to witness the energy of a Skyclad’s live appearance. I arrived at the venue half an hour before the support acts appeared on stage. So I drunk a couple of beers before Riffobia take their positions. The band was from Trikala and as I have informed they were playing thrash metal. Indeed they deliver and they did it excellent. The four-piece thrash act with great sound was a great opening for the night. For almost 45 minutes the speakers blew their thrash attack and it was awesome. The binding of their music was beautiful for a local band and I enjoyed every second of them. The crowd was not more than 100 people but the warm up for our necks was perfect. The sound once more was flawless; the crew of Eightball Club does great job referring to sound of their live gigs.

Dark Nightmare was the next act to perform. They appeared with a keyboard intro and immediately their epic heavy metal filled the venue. Consisting of five members, the Grevena’s pride played for us their set for about an hour. I confess I am not a fan of their genre, though I must say that the band seemed that they worked really hard to get to this level. And especially the riffs that were fired from both of the guitarists were excellent. At last their stage performance was absolutely magnificent and they received the love of the crowd generously.

The clock was setting several minutes after ten and I found myself in agony to watch the folk/heavy metal gods called Skyclad. The attendance got to the maximum right before they appeared on stage and it must have been around 300 people. For the day – as I said weekdays are difficult for a concert – this number is satisfactory, but for the price you had to pay to see such an historical band it seemed we were few.

Without any more delay the first riffs of “Spinning Jenny” filled the room and the crowd went frenzy. Immediately with a small introductory of the song, “Earth Mother, The Sun And The Furious Host” sounded from the speakers and the beautiful fiddle melodies were like a sweet wine for our ears. The beginning of the show was a sign that this could be a long and beautiful night. A precognition that would come true after the two hours concert came to an end. The third song, “Skyclad”, as Kevin Ridley said revealed the band’s name; if there was anyone that didn’t know it already. The continuation was as powerful and energetic as the start of the show. Mr. Ridley made some presentations of the members and then they played a couple of songs from their latest albums. Two of them came from the non-Martin Walkyier era. And as much as I missed his presence in the band, I didn’t notice his absence at all through the whole duration of the concert.

“Cardboard City” began a small journey of six songs to the earliest albums of the band and everyone was having a great time. The band was enjoying every moment of the show as well as the crowd did too. From “The Wickedest Man In the World” – as Steve Ramsey presented from the vocalist Kevin Ridley – until they lower the speed with “The One Piece Puzzle”, the band was smiling all along. The positive vibes of the crowd was clearly unveiled after each song, when they cheered the name of the band as if they were a football team. Then it was time for some political and social thinking, when we asked by Skyclad how did we cast our votes in “The Parliament Of Fools”. Yet the party was going on.

It was clearly a “Declaration Of Indifference” with the melodies of Georgina Biddle’s violin that keep our ecstatic dance continued. Many songs of Skyclad are drinking songs. So it is “Another Fine Mess” that was dedicated to Graeme English the bass player. And as we keep “dancing” and stage diving – that was something that left Skyclad amazed – the first part of the show came to an end and leaving us wondering if “Thinking is Allowed?”. The first encore was consisting of three songs; two from “Irrational Anthems” album and the infamous cover song “Emerald” of Thin Lizzy while the crowd went mad. Until now they played 23 songs as many as they have played last night in Athens, but we get one more song with a second encore. A surprise that showed the appreciation of the band for the magnificent atmosphere the crowd created.

“History Lessens” brought the concert to the end and left us with a bittersweet taste. The sweetness because we’ve watched a great gig by a great band and the bitterness because it has eventually came to an end. It was truly a party, not just a live concert.