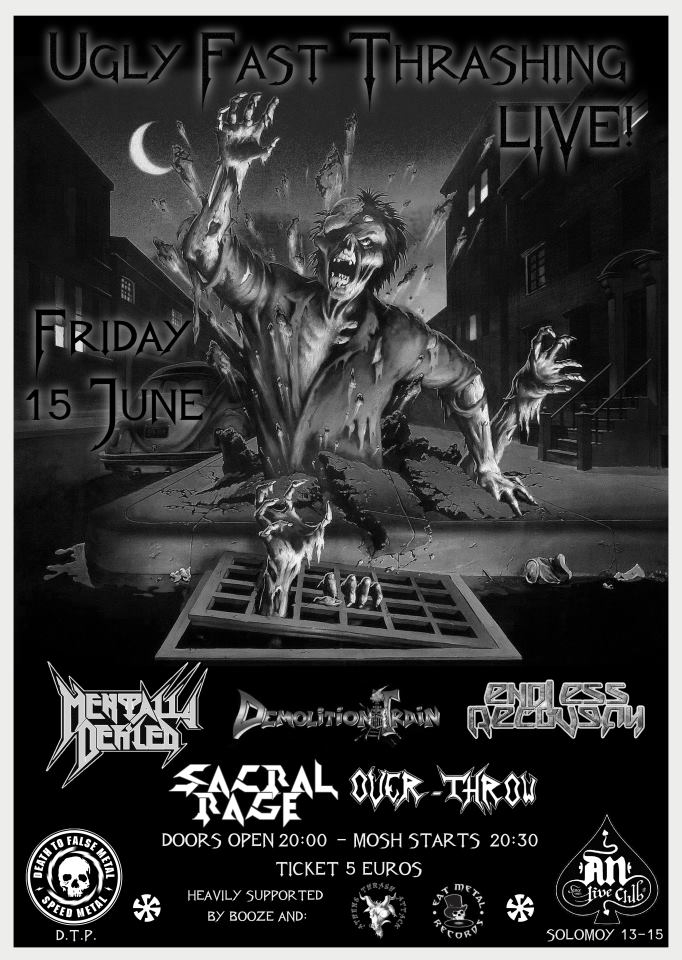 This June was definetely a thrash metal month for Greece! Apart from all the big foreign thrash bands that have already visited the country and the ones that will play here in the very near future, a very good event like this came to make the live schedule even better. The bands that played were Over-Throw, Endless Recovery, Mentally Defiled, Demolition Train, Convixion, and members of Sacral Rage played some of their songs with members of the other bands.

Over-Throw was the first band to play. A relatively new thrash/crossover band that kicked asses for 30 minutes. They played 4 songs of their own and 4 covers, and all of them were played very well and with very good stage performance. The crowd liked their performance and was actively participating by having some good friendly violent fun! The band will start recording their first demo in a couple of days, that will include the 4 songs that were played in this concert.

Mentally Defiled is a well-known thrash band that has played in a lot of concerts. Due to a serious personal problem, their bass player couldn’t participate in this event, so they didn’t play for a lot of time. However, they performed very well despite of the absence of the bass. They played some songs from their first record, “The Thrash Brigade”, and some new ones that sounded very good.

Demolition Train was the next band to play, and they also played great. All the songs were performed very well. It was my first time seeing them and they made my head explode!

Convixion played a killer show, full of energy, passion and power! A very good performance from the band that made the crowd go crazy. A very nice move was when members of Sacral Rage (they canceled their performance due to a serious problem of their bass player) got on the stage and played some of their songs with members of Convixion, Demolition Train and Mentally Defiled.

Overall, all the bands played very well, we had a hell of a time and we are looking forward to the next event. Support the Greek scene!