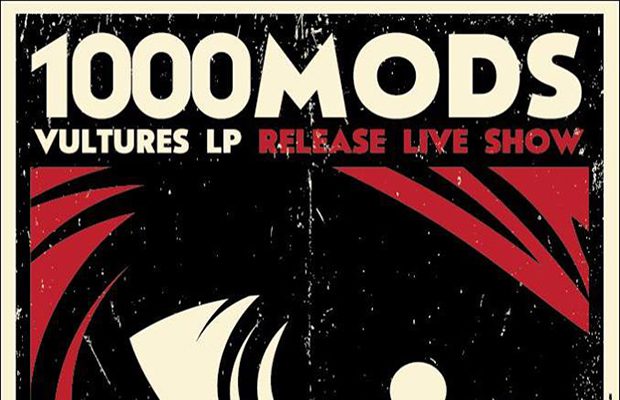 If you have read the recently uploaded review on 1000mods’ “Vultures”, you may have already guessed that I was quite excited for this release party. Unfortunately, due to some transportation mix ups I missed the set of Cellar Dogs, but I walked in AN Club just in time for the incredible performance of Automaton.

I walked inside an already packed venue, to be greeted by Automaton’s brutal wall of sound. Oh, and L-G Petrov called, he wants his voice back! From the first minute my ears adjusted to the sound, I gazed astounded at the singer and watched him give out the best brutal vocal performance I’ve ever heard coming from a Greek throat. Imagine a mixture of Ola Lindgren and L-G Petrov, screaming over a devastating doom barrage of slow, mesmerizing riffs that reminded a mixture of Entombed and Black Pyramid, if anyone but me can comprehend such a thing. From their devastating EP they played Breathe in Stone/ Echoes of Mount Ida, Going down and I am not sure if they also played Beast of war. What I’m sure of though, is that their choice of song to cover can be nominated as the highlight of this year’s concerts. During the first 2 minutes it sounded familiar, but their very low tuning made it difficult for me to put my finger on which song it was. That is until the beast behind the microphone screamed “I TALK TO PLANETS BABY!” and I felt I was one step away from a heart attack. If only I could describe the faces around me. The perfect opening for the show to come and you definitely need to look up their work, not to mention you should seize any chance to watch them live.

Fifteen minutes after the end of Automaton’s performance, 1000mods came passing through the crowd (by this time the venue was in capacity) and onto the stage amidst apotheosis. Concerning their past live shows, in Vultures’ review they were described as “a huge, nonstop party from the moment they turned the amplifiers on till the time they turned them off” and I don’t see how this could not also be the case tonight as well. By the start of the third track I was convinced that, at this time and place, I wouldn’t prefer to be seeing and hearing no other band in the world than 1000mods. When we would exit the venue we’d have much time for objectivities but for as long as they were on that stage, they were the most fun band to watch in the whole white world.

The parade of tracks to be played that night started with “Road to Burn”, “7 flies”,“Track me” from Super Van Vacation and “Claws”, “Big Beautiful” and the most beautiful “She” from “Vultures”. But those were just the appetizers. Appetizers or not however, the vibe that had been created so far in AN Club was monumentally festive. People singing along the lyrics, guys crowd surfing with flip flops on (!), stylish girls (which you wouldn’t believe in the first glance that had it in them) going berserk on the front row, people screaming and banging their heads to the rhythm of the unbelievable riff bombardment of 1000mods and the most important of all: The mood was so positive and FUN, absolute fun! I felt like I’d known the people around me for years and we had just come to see our friends play, talking to them about the show, partying with them and I could see from the smiles and body language that everyone shared the same feeling (except for the mayhem under the stage of course, if someone could detect body language through this mash up of beating, banging, dancing and screaming they could as well be a wizard).

At this stage of the report we need to have some closure concerning the setlist. I’m just going to drop some names here and you do the math. “Low”, “Vultures” and “Reverb of the new world” from Vultures, “Desert side of your mind” from the “Blank reality” EP, “El Rollito” and SUPER FUCKING VAN VACATION from the same titled album (with all the special psychedelic sound effects) and for a double encore, how would you like “Vidage” (obviously) and “Boor” from the Blank Reality EP after a frantic demand from the fans and after they had apparently concluded their set? That’s right, a spectacular psychedelic stoner extravaganza for our eyes and ears only! A perfect connection with the crowd, a perfect, studio-like sound and a perfect on stage performance (You don’t see in every concert the guitarist playing a solo while crowd surfing or the bassist diving head first to the crowd in an adrenaline explosion in the middle of the song, do you?) from 1000mods who, literally, in their own lyrics from “Road to burn”, those last few years “have given us more than we ever expected”. It was an unbelievable live show for the release of an amazing album and I’m quite sure that it made the bond between 1000mods and their fans even stronger.

P.S Feel no sorrow, feel no hate, feel nothing at all,hold me babyyyyyyy!