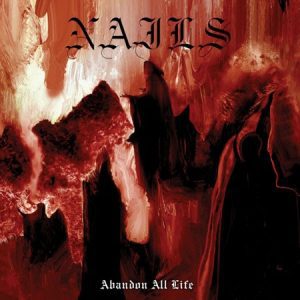 Here we are, having one of the most new hot names in the grind scene, releasing a record this month. The band is Nails, and they’ve been rocking around California for the past five years! With two successful music records and a split one, Nails return with “Abandon All Life“, serving heavy and speeding grind with a lot of black and punk elements.

“Abandon All Life” is mostly a mixed album. I find that there are some epic moments in it, but on the other hand, I try hard to choose out the special elements. Speaking of special moments, “No Surrender” is probably one of the best songs of the year for the extreme music scene. Heavy riffs combined with chaotic vocals, give out this one minute destructive track! Furthermore, “Wide Open Wound” starts with blackened melodies, leading to some groovy riffs, ideal for headbanging and moshing. Nails have been using some black metal or post metal elements for their music, without dropping their grind label. Their way into crafting aggressive and small in duration songs, but with loads of influences in them is totally remarkable.

Beside all these, the record as a whole fails to bring out something really strong (without that to mean something really negative). Songs like “God’s Cold Hands” or “Pariah” end up as fillers in my ears, because of the lack of sticky riffs or really heavy ones. When you hear an album in such small duration (as used in grind or core albums), you expect every single moment of the album to be a striking one and that’s the reason why the standards are quite high. Moreover, I didn’t like the folk metal change in “Abandon All Life”. It doesn’t fit with the song and kind of breaks its continuance.

Even with these facts, Nails have managed to add another positive thing to their music; the lyrics. Songs like “Tyrant” or “Absolute Control” deal with some major social matters. The whole record is written as food for thought and it continues the band’s tradition in writing high-quality material from “Obscene Humanity” and so.

As a whole, “Abandon All Life” could be a better record. However it is a satisfying one for the band and the fans. I’m keen on watching Nails live sometime in the future maybe, the band is one of the most energetic ones on the stage. Nails are currently touring busily in US as their website informs as, and planning some European dates too, as their facebook page tells us.