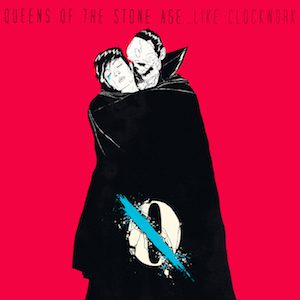 In the past two decades post rock and alternative rock made a strong impact on the music industry. In 1998, Queens of the Stone Age released their debut album with Josh Homme, the band’s vocalist, guitarist and main composer on the front line. The band created a huge fanbase, especially in the USA, recording busily for a decade and on. Josh Homme and Queens of the Stone Age returned to release their sixth full-length record ‘…Like Clockwork’. In this album, Joey Castillo, the band’s drummer got fired and Dave Grohl (Homme’s close friend) replaced him as a session musician. The band continues with four members in its line-up and a darker (as Josh states) new music record.

‘…Like Clockwork’ can be characterized as a soft rock record, with a handful of alternative elements. It is lighter than expected, with a lot of piano sections and closer to alternative rock releases of the last decade. The ten songs of the record are kind of overwhelmed, with plenty of add-ons or musical instruments. In times, the listener feels lost in the disc’s complexity, which along with the compositions, give mixed feelings about ‘..Like Clockwork’. Although there are lots of good moments, the overall outcome is kind of negative or mixed.

To be more specific, over the ten songs, only ‘I appear Missing’ and ‘I Sat By the Ocean’ are overall perfect, without something missing. The other ones turn out to be good songs with some bad moments and there are also some fillers. There’s a post-rock feeling in the whole album. Songs like ‘My God Is the Sun’ and ‘I Sat by the Ocean’ point out those post-rock influences, as well as some 70’s rock ones. On the other hand, ‘Smooth Sailing’ for example, remind of bad pop-rock hits, or some bad-shaped hard rock song.

Piano parts are all over the record, playing a major role in songs like ‘ Kalopsia’, ‘ The Vampyre of Time and Memory’ or ‘..Like Clockwork’. Josh sings over melodic piano or keyboard’s parts, mixing them with heavy guitar elements. Considering all the above, it is hard for me to grade the record; ‘I Appear Missing’ is one of the most beautiful songs ever written. Then again, the album did not hook me up even after a lot of hearings. I expected more from this band, something better than the previous record ‘Era Vulgaris’.

With a fair production, nice artwork and a pleasant sound, ‘… Like Clockwork’ is fresh and enjoyable. However, it doesn’t come up to our expectations, being just a good record and not something special, at least for my personal music taste.