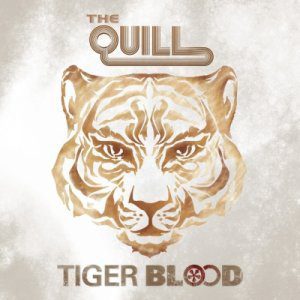 Sweden is a country that doesn’t only massively produces death metal bands, but has also a strong stoner rock scene. Fair example, and maybe the most popular, is Spiritual Beggars. However there are many other small bands or big names. The Quill is a stoner/southern rock band that has also gotten actively busy in Sweden and in Europe generally since 1990. After the first success with some stoner rock albums the band has progressively turned their sound to the heavy rock music of the 00’s, producing four successful full length albums this decade only. In 2013 The Quill returns with ‘Tiger Blood’, hoping to continue giving out good rock music.

Let’s get our facts straight. ‘Tiger Blood’ includes ten songs with one extra in the bonus edition. The music style of the record is the heavy rock the band is known for. The tracks are enriched with southern rock elements and stoner rock heavy guitars. The Quill tried to sound modern, with the specific modifications to the sound of the album, sounding a bit plastic but clear and rocking. We don’t have many soft song, as the majority of them are bad-ass and fast.

The record begins with ‘Freak Parade’ and ‘Go Crazy’. Both of them are fast and aggressive, with ‘Go Crazy’ to remind me of Clutch’s latest record. The progress of the track is quite similar (but not a copy) of Clutch’s new sound and this is considered as a positive fact. The stoner rock they used to play in the first records is visible throughout ‘Tiger Blood’ but on the other hand, in songs like ‘Greed Machine’ where the band lays back and composes slower or softer songs, similar to modern rock ones, it just doesn’t seem right. However, I liked the southern vibe of the disc, and songs like ‘Getaway’ where I catch some good old blues aura. The influences of the band are fully noticeable.

‘Purgatory Hill’s begins with a strange symphonic riff along with heavy guitars, being the most ‘heavy metal’ one of the record, while ‘Storm before the Calm’ or ‘Land of Gold and Honey’ sound more like the ballads of the disc (the second one being acoustic). In addition, the bonus track (‘Ballad of a Selfmade Gun’) is one of the best in this record and it is a pity that the band chose this as an extra song. As far as the lyrics are concerned, they circle around the usual stoner rock themes, like freedom or ambitions or struggles in life.

‘Tiger Blood’ does not give out something new for the stoner rock music scene. It is a pleasant music album, definitely not the strongest one of The Quill’s career. A well-played record, with intense, heavy rock hits.