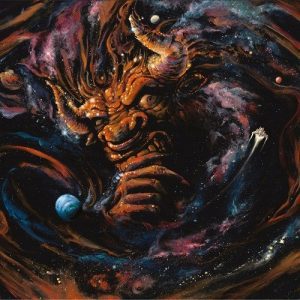 The pleasures of life that stick with you truly are the small ones. Having on your hands the new album from the greatest rock band of the last 20 years, getting lost inside that extra terrestrial, psychedelic art cover and listening to the first notes of “I live behind the clouds” classifies as one of these pleasures.

What Monster Magnet mean to me (and all their fans) is a very complicated thing to explain. This band takes your fears, your thoughts, your dreams and (with the help of their abstract and psychedelic lyrics) builds a song that you can relate to for the rest of your life, a song so sweet and introverted that you could swear Dave Wyndorf peaked inside your brain some day and forged this song from what he felt and what he saw in there. And then they manage to turn the other you into a song as well. The other you that wants to party, to rock, to scream, to break things and dance and release all of the energy available in 10 minutes. They take that from you and they build a goddamn rock ‘n’ roll tornado of a song that makes your blood boil each time you hear it. And every single one of these things exists inside the “Last Patrol”.

Since the last release by Monster Magnet was “Mastermind”, there was this lingering fear that they might trap themselves again inside their sound, that sound they had adopted since “Monolithic baby!”, where the “up to 5 minutes rock ‘n’ roll hits” had blown the psychedelic element out of the picture, a plan that ultimately backfired in ”Mastermind”. Yet from the moment the artwork of “Last patrol” was published I knew there was no way that would happen again and that something good was cooking. If I had to describe the sound of that album in one sentence that would be “Dopes to infinity plus Powertrip with small hits of Superjudge”. It has this vintage, badass and fuzzy sensation but in a more cleared up and mature way. It’s sleazy yet it’s clean. It’s dark, yet it’s happy. It feels like a tribute to all their eras but an opening to a new destination in their music.

The most important thing for me is one. That almost every song puts a great smile on my face because they make me feel like the first time I listened to a Monster Magnet track that taught me there are new boundaries in music, gave me goose bumps and left me mumbling clichés like “This isn’t happening” or “This is the best band of all times”. You know pretty well what I’m talking about. These songs feel warm and familiar, like a great friend you had lost for some time but you suddenly bumped into and now you have the opportunity to catch up and laugh about the old times. Listen to what they do in the cover of the classic psychedelic song “Three Kingfishers” by Donovan for God’s sake! They turn it into a track that is totally their own with a colossal riff that will be written down in history and a solo that NO OTHER BAND in the planet can pull out, a solo straight out from some track that got left out of Superjudge and 20 years later it’s got me on the floor banging on the wind with my fists, screaming “Why doesn’t my stereo go louder?” (like almost any solo in this album for that matter).

Listen to the epicness and the power of the riffs of “Mindless ones” or “End of times” or “Strobe Light Beatdown”. They are the themes of a movie where a red convertible Chevy speeds away from an explosion and the hero/driver is off to make his last stand against some equally bad ass villains. Here lies the “Powertrip” element I wrote about previously. But what rules inside “Last Patrol” is what Dave Wyndorf stated some time ago that would and that is “psychedelic space rock with a 60’s garage sensation”. There is a lot of psychedelia in this album, non conforming structures of songs (like the awesome same titled song!), wide use of bongos instead of drums, trippy sounds and messing with guitar effects. Check out “King of Supernature” for example, which seems like the 2013 born little brother of “Blow ‘em off”. Furthermore, we witness the existence of many “clean”, ballad – like songs such as “Paradise”, “Stay tuned” or “One Dead Moon”. None of these three songs is something special or mind blowing, yet they bond real nice with the whole. One of my favorite experimentations in this album is the song “Hallelujah”, which is written in the style of gospel church songs but with Dave Wyndorf giving the rhythm on the mic, giving thus the result of a hellish, drunken preacher mocking his flock. This so much fun!

And speaking of Dave: Okay, it’s been 23 years since your first EP! When will you stop sounding exactly the same, giving as the same chills every time you sing low and driving us out of our freaking heads every time you sing higher, using your trademark vocal lines and tone that no one can copy? It’s unfair towards the other singers, come on!

In the end, when the smoke clears, this is what “Last Patrol” leaves me with. This revival in their sound, this breath of fresh air made me happy beyond understanding. But “Last Patrol”, no matter how much I’d like that, is no milestone in their discography. It has many great songs and a few that from now on I will listen as much as the old glories, the songs that made them the greatest rock band of the last 23 years. But “Last Patrol” is a milestone in the way that it signifies a turning point in their sound, a turning point in the way that they want to create music again. And it is a way that incorporates all the elements that we loved in them in the past, it filters them and produces a new, vibrant, unique outcome full of promises that says “We are back, playing how we love to play and whoever doesn’t like this can take the highway”. In any way they do it, I guess some bands were meant to write history.