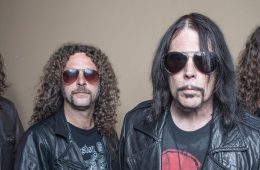 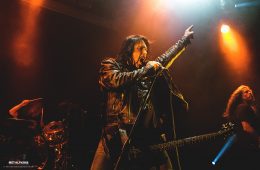 Panagiotis KaragiannidisApril 7, 2016
Following the kickass show in Athens, MONSTER MAGNET made a marvelous appearance the day after in Thessaloniki as well. In contrary with forecasts that were spe...
00 min read 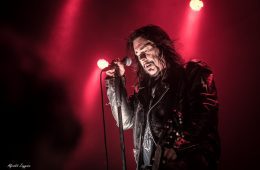 Achilles PantogyiosApril 6, 2016
It’s always a huge pleasure (and even that feels like an understatement), when...
05 min read 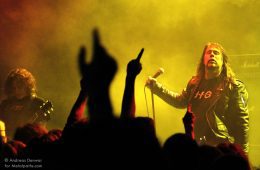 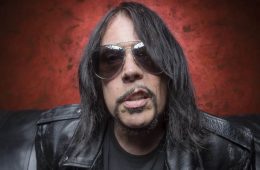 WYNDORF: Why MONSTER MAGNET ‘Can’t Get Arrested’ In The U.S. 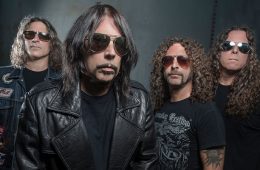 MONSTER MAGNET To Release ‘Milking The Stars: A Reimagining Of Last Patrol’ In November

Manos SpanosSeptember 12, 2014
2013 saw the release of MONSTER MAGNET's latest album, "Last Patrol". Now comes "Milking The Stars: A Reimagining Of Last Patrol", due on November 18 via Napalm Records. Met with critical acclaim and supported by a world tour, "Last Patrol" has become a staple in the MONSTER MAGNET discography. Today the artwork, track listing and first song from "Milking The Stars" have been released. MONSTER MAGNET mainman Dave Wyndorf's pick for the first track he wanted fans to be exposed to is "No Paradise For Me". The song, according to Wyndorf, is "interesting, fucked up and old-school sounding." Check it out below. Says Wyndorf about "Milking The Stars": "'Milking The Stars' is a 'reimagined' version of 'Last Patrol' featuring four new songs and live tracks. "This was a happy experiment for me. It's not a remix record by the current definition. It's more like 'Last Patrol' in a 'what-if?'-style alternate reality. "'What if these songs were recorded in 1968?' 'What would happen if I turned a pretty song into an angry one?' 'How would adding creepy organs and Mellotrons affect the emotional vibe of a song?' These are just a few of the questions that roll around in my head when I write and record any album but this time I decided to actually answer them with fully fleshed out, recorded and mixed examples. "The process actually created new songs. That's the icing on the cake for me. New sounds, new vocals, different instruments and arrangements make for a weird 1960's vibe totally apart from 'Last Patrol' which was fun for Phil, Bob, Garrett, mixer Joe Barresi and myself to explore. "Finally there's expanded versions of the songs 'Last Patrol' and 'Three Kingfishers' as recorded live at the AB club in Belgium, 2014. Both those songs were re-arranged for 'maximum rock and psych' before we hit the road last year and feature the debut performance of new MAGNET bassist, Chris Kosnik. Personally, I think they beat the original versions." "Milking The Stars: A Reimagining Of Last Patrol" track listing: 01. Let the Circus Burn 02. Mindless Ones '68 03. No Paradise For Me 04. End Of Time (B-3) 05. Milking The Stars 06. Hellelujah (Fuzz And Swamp) 07. I Live Behind The Clouds (Roughed Up And Slightly Spaced) 08. Goliath Returns 09. Stay Tuned (Even Sadder) 10. The Duke (Full On Drums 'N Wah) 11. Last Patrol (live) 12. Three Kingfishers (live)
03 min read 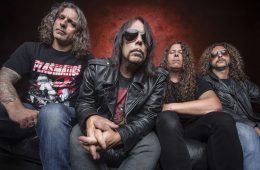 Manos SpanosDecember 10, 2013
MONSTER MAGNET has been forced to cancel the remaining dates on its North American after the band's mainman, Dave Wyndorf, was taken ill. Comments MONSTER MAGNET guitarist Phil Caivano: "We are all totally bummed the rest of the tour is cancelled. "Dave is really sick. "We were trying to go day to day, only for him to get worse. "I'd like to thank everyone who came out and all of you who planned to. No one is more bummed than us. "We will be back." Adds Wyndorf: "Full-on flu. Voice killer, gig destroyer... "I'm so sorry. I hate it more than anybody. "We'll make it up, I swear." Affected dates: Dec. 10 - Toronto, ON - Lee’s Palace Dec. 12 - Boston, MA - Sinclair Dec. 13 - West Chester, PA - The Note Dec. 14 - New York, NY - Bowery Ballroom MONSTER MAGNET's new album, "Last Patrol", sold around 2,300 copies in the United States in its first week of release. Released in North America on October 15 via Napalm Records, the CD was produced by Dave Wyndorf and Phil Caivano, while "Evil" Joe Barresi (TOOL, QUEENS OF THE STONE AGE, BAD RELIGION) mixed the album, with additional production duties handled by Matt Hyde. The artwork was created by Johun Sumrow with consultation coming from Chris Ryall and designs by Ryan Clark for Invisible Creatures Inc. The album was made available as a limited-edition CD, standard CD, 2LP and digital format. Wyndorf previously stated about "Last Patrol": "'Last Patrol' is a return to our roots in terms of vibe and recording style. It's full-on psychedelic space-rock with a '60s garage feel, recorded almost exclusively with vintage guitars, amps and effects in our hometown of Red Bank, New Jersey. The songs are a kind of space-noir, tales of cosmic revenge, peaking libidos, alienation and epic strangeness. It's a weird trip through the back alleys of a dark, retro-future, which not by coincidence very much resembles my own life. [laughs] The lyrics aren't fantasy, really, rather a recounting of my musings on, observations of and general emotional reaction to my life and environment during a one-week writing period in February of 2013. But I tend to use the vernacular and imagery of science fiction and surrealism to express myself and that's where these lyrics get trippy. There's also our cover version of DONOVAN's 'Three Kingfishers', which I thought fit the mood of the album." He continued: "'Last Patrol' was produced by Phil Caivano and myself with an effort to bring a homegrown feel to the whole affair. We had been doing smaller projects out of Phil's Studio 13 recording space and I really felt comfortable there so it was the natural choice on where to record the next full-scale MONSTER MAGNET album. Phil and I grew up together and have a shared love of some very particular vintage music and styles. And everybody in the band played their asses off on this one."
03 min read

MONSTER MAGNET Mainman: ‘I Never Stopped Touring, So My Perception Of Time Is Really Weird’

Manos SpanosNovember 3, 2013
Joe Daly of The Weeklings recently conducted an interview with MONSTER MAGNET mainmanDave Wyndorf. A couple of excerpts from the chat follow below. The Weeklings: Since you broke out in the late '80s, you've survived grunge, the destruction of the old music industry, a shitload of lineup changes, and you yourself have survived some close calls. How have you survived? Wyndorf: Just duck. Know when to duck. The perception of time gets kind of skewed when you're in a band, because you're always working and traveling all the time. I never stopped touring, so my perception of time is really weird. I could easily go ten years and then look back and go, "Man, that was a tough six months!" Look at yourself in the mirror, man! It's been ten years. What have you been doing? Getting laid and traveling takes up a lot of time, and that's what I did for ten or twelve years. As soon as you get home, you realize that the whole thing is not real. You're not happy with the music that's on the radio, but there's no place forMONSTER MAGNET. In my head, we'd be on the charts with ten other bands that were likeDAVID BOWIE, or that were as cool as HAWKWIND, or as cool as THE STOOGES. That was the world I wanted to live in, but I realized that was my childhood. It ain't gonna happen. Now I'm up there with PEARL JAM. That's what I get. The bands that I like, they got to play withTHE STOOGES and HAWKWIND, I get to play with fucking PEARL JAM! That's not cool. Nothing against PEARL JAM, but you know what I mean? The Weeklings: What was your goal for the new album ["The Last Patrol"]? Wyndorf: I really didn't want to fuck around. I made a big mistake on the last one by not taking enough time to do it. I discovered the hard way that just because I can write an album in a short amount of time doesn't mean that I should produce it in a short amount of time. Anybody who listens to the last one and then this one will notice that on the new one, there's a lot more attention paid to the parts. One of the dangers of modern technology is that you can have Pro Tools and you can clean stuff up. Nothing against computers or Pro Tools, but they can be abused, and it was abused on that album, so I was like, fuck that, I'm going to do a whole psychedelic record with just the stuff that I got started on with "Mastermind", and that's all it's going to be. Also, I didn't feel like writing a record with the fist-in-the-air rock anthem on it. I'm too old for that shit. "Come on, everybody, let's rock!" Now, , "How about you rock, because I'm too tired to rock!" [laughs] I'm not going to say, "All you people, jump up and down, while I sit on a chair and have a cigarette." The new album is one of things with a psychedelic rock vibe, atmosphere, weirdness, ambiguity… that's what's important to me now. The Weeklings: So what's the plan for the album and beyond? Wyndorf: Well, the plan is the same as usual, to beat the living shit out of it on the road, except this time we're actually going to go in the States. Album comes out [October] 15th and then we hit the States and do the first full tour we've done there in ten years, and then we go to Europe and do the usual, which is play the living fuck out of it. We got to Europe like two or three times a year, for four and five weeks at a time, and then Australia. Anywhere else in the world that's buying. It's quite a busy world out there. I made the decision to ignore the States about ten years ago. Knocking on the door in the States is tough. If they're not buying what you have to sell, you could easily go broke. Or you could be a smart human and go to Europe and drink tiny cups of coffee and stay in nice hotels and rock the way God intended. Read the entire interview from The Weeklings.
04 min read 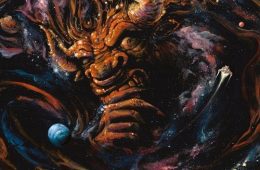 Panagiotis KaragiannidisOctober 21, 2013
The pleasures of life that stick with you truly are the small ones. Having on your hands the new album from the greatest rock band of the last 20 years, getting lost inside that extra terrestrial, psychedelic art cover and listening to the first notes of “I live behind the clouds” classifies as one of these pleasures.
06 min read

Panagiotis KaragiannidisOctober 18, 2013
There is no doubt that if there is a band that knows how to rock, it's Monster Magnet! For more than two decades now, their music still travel us to outerspace and further more to the most bizarre, psychedelic galaxies. This time, the Monster has scheduled another trip for us through its brand new "midnight record", as Dave Wyndorf likes to call it; "Last Patrol".
011 min read