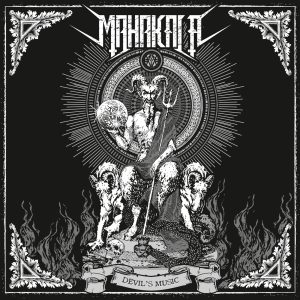 In the 70’s, worshiping Satan in rock music was a common thing. Occult rock and metal got their traits from the 70’s and a whole heavy metal culture is based on it. Devil symbolizes freedom and opposition to everything the system dictates. Our times, can actually be characterized as the Renaissance of occult music, a back to the roots beginning. Why am I writing this story? Because the record I am about to speak for is Mahakala’s first full record album, ‘’Devil’s Music’’! Since the record was released, it became a matter of discussion. For some, the record is a good one, and for others, the record is really bad. I’ve been hearing mixed criticisms from everyone. The reality is somewhere in the middle I think. Let’s get our facts straight!

Mahakala is a heavy metal band. Yes it is. I can get the epic elements in the vocals and the heavy doom groovy riffs. In some point the band sounds like Pentagram, or Candlemass if we should label Mahakala’s sound. The sound of the record is crystal-clear. A remarkable work has been done in the mixing of the record and in sound engineering. The concept of the record is pretty interesting too. The record tells the story of a man who sells his soul to the devil, turning into the path of darkness and the kingdom of the dead. It tells stories about the devil and its music, about god and it creates its own lore. It is totally recommendable to listen to the whole record along with the graphic animation in ‘Youtube’ and lose yourself in the stories.

However, where I personally think the album loses is in the music. There are plenty of repeated moments in my ears within the record and in some points the record progresses really slowly. For example ‘Murder In Neverland’ is a song which slows down the pace of the record and I consider it as a ‘filler’ between two great songs. Mahakala repeats the same pattern of songs all over again and I think the band should have used a variety of not similar guitar riffs if they wanted ‘Devil’s Music’ to be a memorable concept record.

I loved the intro, with the clean guitars in the beginning, playing an evil riff. Later, the song becomes a heavy doom instrumental jamming and ‘Evil Man’ comes up; an absolute NWOBHM song which totally fits the style! Those two first songs combined, are my favorite moment of the record. On the other hand for example, ‘Pact with the Devil’ is a slow, electric wizard-like song with a main bass riff , which in my ears it just slows down the pace and the flow of the record in a way where the listener gets tired and wants to skip the song. The two parts of ‘Promise Land’ include a main riff which sounds similar to raining blood by Slayer, but only loosely similar. ‘By my Hand’ is also a beautiful song, a heavy doom one. The end of the song is fast and aggressive and I would love to see more moments like this in the record.

In conclusion, the record isn’t bad at all, but I think Mahakala could have written something much better, and eventually they will sometime in the future! For a debut album and a concept one, ‘Devil’s Music’ is something more than fine!