The almost yearly appearance of PRIMORDIAL in Greece has obtained an almost ritualistic feel, like a shepherd herding his faithful flock, so when the time arose (in the form of a mighty new album after 3 long years), we couldn’t help but hear the call. This time, the site was the familiar dungeons of An Club, where we had also seen their previous masterpiece, “Redemption at the Puritan’s Hand”, come into form.

Woefully, the gig was to start at 21:30; a grueling concept for your everyday Friday night if you consider two support bands were to precede PRIMORDIAL. The good sides of this is that the place was already half-packed as MAHAKALA were gearing up – the other one, that I actually managed to arrive on time. 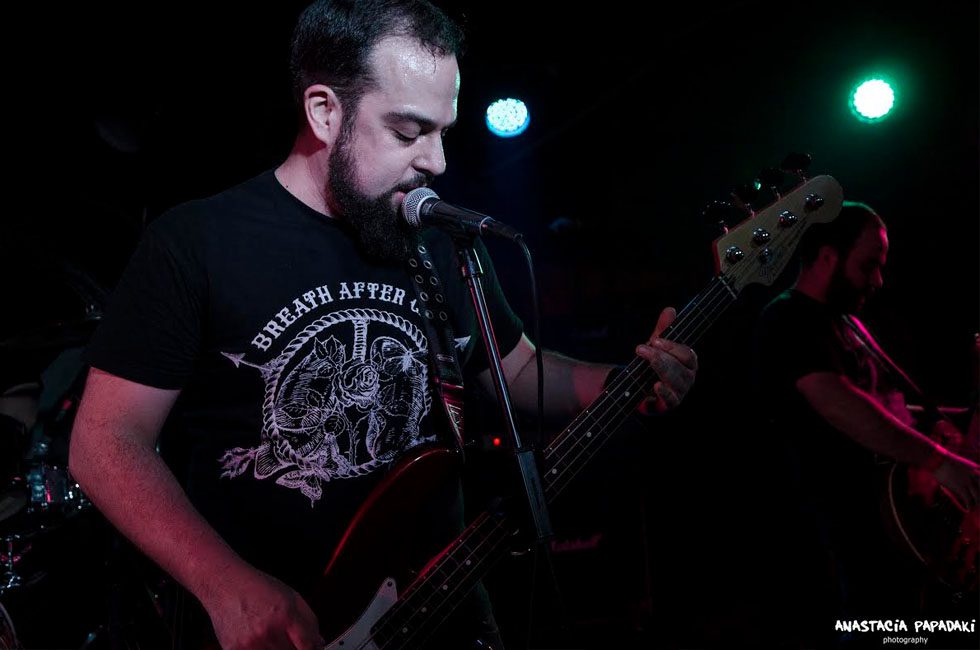 MAHAKALA are an up-and-coming band in Greece with some hype around them, so several people are bound to know them. Still, the effect-ridden heavy/stoner metal sound they brought with them must have been a surprise to those unfamiliar with them and made for a rather disjointed support. Despite the fact that I was in that “unfamiliar” group, I rather enjoyed them as they were really tight on stage and were very energetic, mostly thanks to their frontman-slash-bassist, who probably remembered how to stop singing and sweating and take a rest long after their playing time was over. They did their best to win the crowd over, and they elicited some reactions toward the end of their set, but I guess they were largely forgotten as soon as the next bands came out.

Next on stage were BATTLEROAR, a well-know name to most fans of epic metal. Just a week after their anniversary appearances on Up The Hammers festival, with 3 lineups from different eras of the band playing in 3 separate days, things return to the normal routine of ass-kicking. Their set mainly consisted of tracks from their latest, successful album, “Blood Of Legends” which were very warmly received by the crowd, peppered with selected songs from their early days. A unique element of their live sound and presence was the participation of a violinist in some of the new tracks who, with his haunting melodies and fills, managed to steal the show (before it was stolen right back). After the crowd exploded at the sounding of the bands’s eponymous song, BATTLEROAR waved us goodbye and things were well in order for the advent of the Irish warriors. 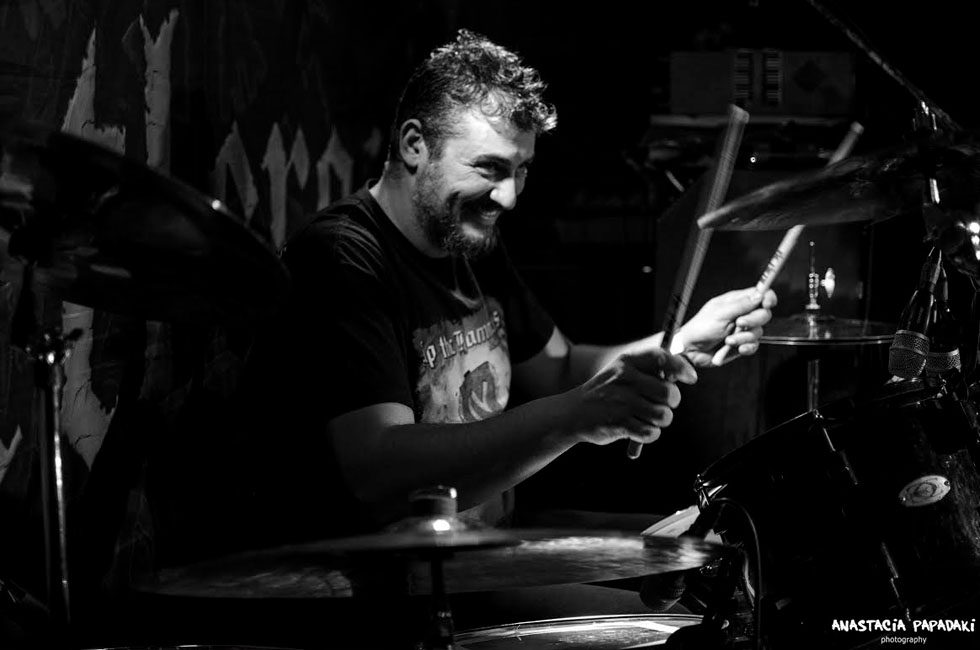 With the spine-tingling rendition PRIMORDIAL did to the Irish folk classic “Dark Horse on the Wind” echoing in the venue (Not heard it yet? DO IT!) the mighty five took their places on stage – though 20 minutes later than the schedule indicated – and kicked things off with a blast in the titular track of “Where Greater Men Have Fallen”. With a little pause to greet the crowd, Alan “Nemtheanga” Averill introduces “Gods to the Godless” and the crowd goes crazy for the first of many times.

There’s no need to describe that feeling of Irish air closing in upon you and your neck choking with sighs and tears, you’ve certainly felt it if you’ve listened to PRIMORDIAL. Alan is always the nexus of all the energy in the venue. A mystical aura around him, he is absorbing the waves of excitement, unleashing them back as thunderbolts of passion, somberness and madness. In “Babel’s Tower” he roars and soars all the way up to Hell (no mistake here), in “Autumn’s Ablaze” he mourns and bellows. Ciaran and Micheal (I will not dare to spell any surnames here as it will probably result in rambling consonants) have been seated at the edges of the stage and are churning out their wistful melodies and powerful, rallying riffs. This probably became more apparent in the consequent duo of “Heathen Tribes” and “The Coffin Ships”, also known as “the stuff of legends” from now on to everyone present. 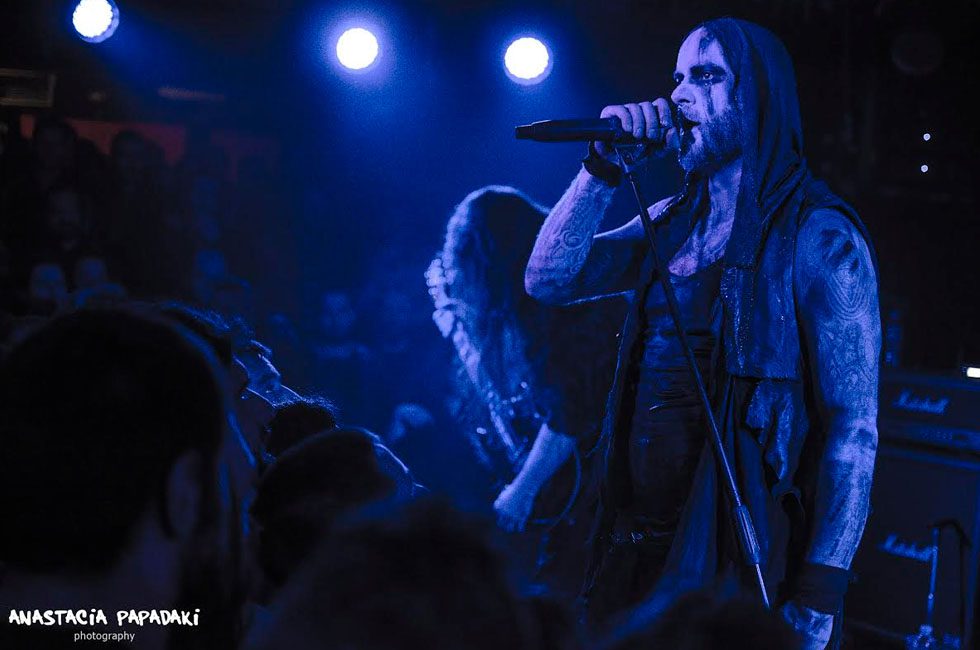 The havoc in the crowd caused by the tracks from “Redemption at the Puritan’s Hand” proved once more how the album has been named another classic in a seemingly endless series – especially in “No Grave Deep Enough”(which Alan dedicated to Battleroar) where, by the way, Simon’s drum kit could barely fit his frantic pace. However, the main focus of the band today was the also brilliant new album and it showed, as they played five songs from it, like “Ghosts of the Charnel House” and the William Blake-inspired (per Alan’s words) “Alchemist’s Head”. But the highlight of the album had not manifested on stage until near the end, and it was, of course, the epic “Wield Lightning to Split the Sun”. The last song of their regular set was “Empire Falls” (which could obviously not be omitted for fear of a riot) and, after a 8-minute riot (yes, it seems the Greek crowd is wild after all) the band left the stage with a bang. But was it to be over? Not at all, since the crowd’s demand for more brought them back on stage, and a final song was decided amidst the yells for this or that song. The majority prevailed, and they had a hell of a good taste, since the final, fatal bullet was the legendary “Sons of the Morrigan”. 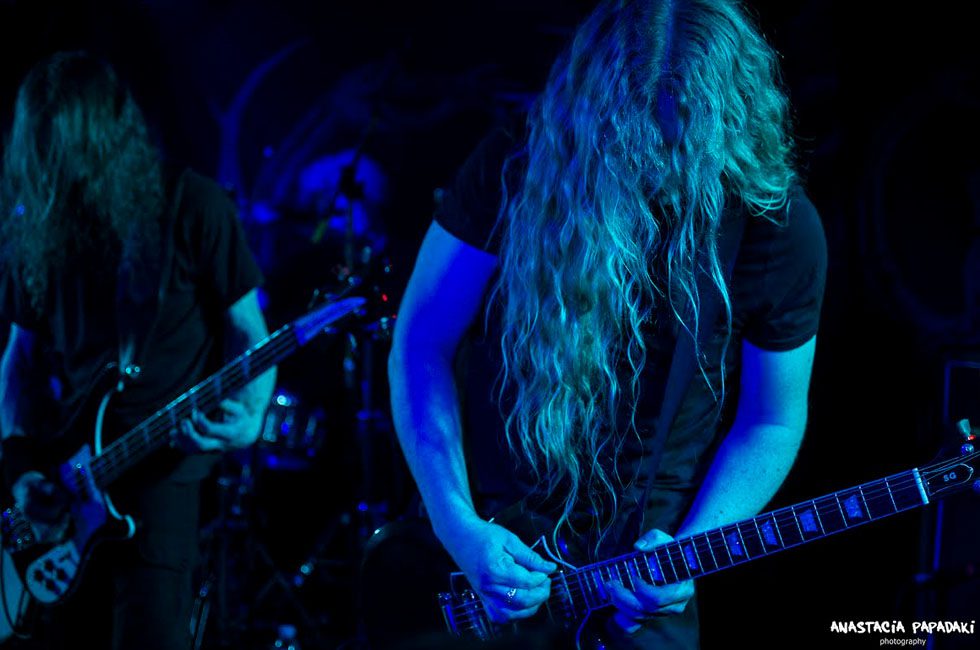 After a full 2-hour set, PRIMORDIAL finally bid us farewell and we were left exhausted, but feeling good. A wave had hit us once again, but we embrace it time and time again, like the waves brushing off against the Cliffs of Moher. So, until we see them again, the Celtic fighting heart they instilled in us will beat on silently, and wait for the time when it will rise again, rise from its grave.