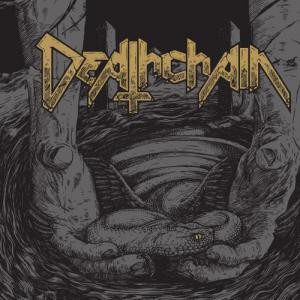 Well Finland is definitely a land of contrasts in terms of metal music. You can either expect Atmospheric/Gothic/Love metal (H.I.M., later Sentenced, Amorphis, For My Pain etc.) or the heaviest Black/Death/Thrash metal (Beherit, Archgoat, Rippikoulu, early Sentenced etc.). Deathchain fall into the second category as one of the best Death/Thrash I’ve heard from Finland. On kick ass records of theirs such as “Deathrash Assault” (2005) they sound like an amazing crossbreed between Destruction and early Pestilence, while “Cult Of Death“(2007) and “Death Gods” (2010) shows the band’s direction to more US Death metal paths without completely loosing the Thrash element that made them known. On a side note they’re also well known to always include the word “Death” or “Dead” in their album titles.

Their new album is entitled “Ritual Death Metal” and starts off with “Voice Of Sharur” a twisted piano intro that reminds me of the interludes used by Morbid Angel on the classic “Blessed Are The Sick” record. And then the “The Stele Of Vultures” comes in blasting through your ears Morbid Angel/Behemoth style then to a midtempo headbanging part to groove then Thrashing towards the end. Another headbanging track kicks in with “Seven Assaku Shadows” (videoclip of the album as well) changing tempo from groove to relentless blasting and also bearing a strong Black metal feel all over it. Next comes “Our Lady Under The Earth” starting in a more atmospheric Doom/Death tone then going into headbanging Death metal riffage with that eerie atmosphere throughout the 7+ minutes of the song including another Black metal riff as a middle break reminiscent of Marduk/Mayhem then back to the groove to end the song. Definitely one of the fullest songs of the record. Moving on to “King Pazuzu“, another song with strong Black metal influences switching between blasting and grooving including a great chorus chanting the song name which will make it really good live favorite. Next comes the beautifully melancholic lead of “Like Worms Upon The Lands” then into groovy Death metal riffing (including vocals from none other than legendary LG Petrov), then Thrashing before coming back to the atmospheric chorus followed by some more Black/Death metal riffage breaking before the end into a more melodic Black metal riff. A beautiful clean guitar melody leads us to “Tiamat’s Eyes Of Death” which comes in with more melancholy and melody only to return to Thrashing and blasting through our ears moving into a more atmospheric/melodic chorus without disrupting the balance between the extreme parts of the song including a great lead after that. The final track is “Abzu Doom” coming in with awesome soloing and midtempo headbanging Death metal riffage and a highly memorable chorus followed by more great Death metal riffage and blasting then back to the final chorus. Another favorite of the record.

Ultimately, Deathchain have evolved from their early Death/Thrash ripping style towards a more Black/Death act devastating everything in its path. They are aware of each genre and know how to combine them. A great album from a great band that fans of extreme metal in general should NOT miss.