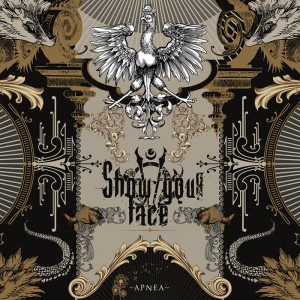 Time for Show Your Face to release their second album called ‘’Apnea’’, their fourth release in total after two EP’s and their full-length ‘’Unleash’’ two years ago. The band plays an American modern groovy style of metal which I happen to like very much from since I was younger, so I had no problem in adapting to the likes of their music. Also, it is known that at least the last decade, I consider Lamb Of God the best band in the whole world, and it was kind of inevitable that I would be responsible for this review, as I was for the ‘’Afraid’’ EP some months ago.

The quartet shows in good shape with a very good production that helps their enraging and rather neurotic metal style of playing get boosted, all sounds crystal clear and the first thing you have to praise the band for is the hard work they did, the outcome has the feeling of a professional touch and it is inevitable that it will grab listeners by the throat. Since I’ve known ‘’Afraid’’ which opens the album from the self-titled EP aforementioned, I knew there was going to be a great opener for the album, which puts the listener straight ahead to the climate of this release.

Tracks like ‘’Forgotten’’ and ‘’Desperation’’ show that the band sounds more mature than ever and if there was any good timing to release the album, that would be definitely now. Their influences can’t be hidden, but it’s not that they copy greater bands and have no personal identity. The rhythm section plays very interesting stuff and in contradiction to what mostly happens in metal releases, they lead the tracks many times for the crunching and ultra heavy guitars to follow. The riffs are built in such way to fit the voice of the turning red from screaming singer and everyone gets satisfied in the end.

The band dares to play also in a little more experimental way in tracks like ‘’I Sin’’ for example, a thing that doesn’t make the album so monotonous as many would think. The only thing that I would have to tell the guys in the most friendly way, would be that some song durations ought to be a little shorter, as some riffs and rhythms get repeated and in my humble opinion, they take back something of the band’s primal energy and recycle it a bit. The album doesn’t last that long, about 47 minutes, but it would sound much better with ten minutes less for example.

‘’Apnea’’ is a very good album made from guys that love metal music, you can listen to it from the beginning and it’s something you have to admit immediately. They walk in straight road and surely they have the skills to produce even better stuff in the future, I’ve seen them live and I know what they are capable of, as they sound much better on the stage. Their second album may prove to be very important for their career and why not, open some doors for them to get into wider crowd, had it not been sounding alike some very favorite bands, I wouldn’t judge it so harsh, but I think the other fans will like it even more than I describe.