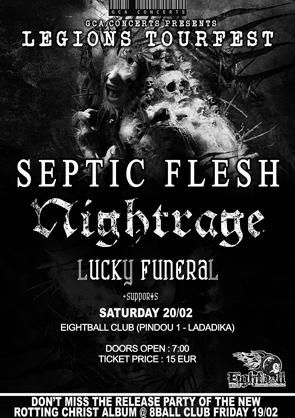 What a night. It wasn’t just a gig, six bands make it a mini festival. Kind of tiresome to attend a fest in a club, but I think it was worth it in the end. The sad fact is that I got there a bit late, so I missed Celestial Immunity’s performance. Moreover, I only managed to listen to just two songs from Ritual of Odds. Having missed most of their show too, I can’t really say much about them. Anyway, let’s continue.

Show Your Face was up next and I have to say they impressed me from the very beginning, and particularly their vocalist, having a wide range of brutal growls and screams. Playing something like Gothenburg mixed with Sepultura, they made sure the people wouldn’t stop banging their heads. Sepultura I said? They covered “Roots Bloody Roots”, creating panic in the audience.

While I’m not a big fan of their style, Lucky Funeral kick ass. Musically, they move around the stoner spectrum obviously influenced by Down. Good overall performance by these guys, but once again, the credit must go to the band’s frontman. That guy, wow, he’s got it in him. A really funny highlight: in the middle of the show he takes his clothes off, leaving only his boxers on and showing his ass to the audience. I bet you don’t see things like this on every show.

At this time I was getting a bit tired and anxious for Nightrage, the main reason for me going there in the first place. Cheers from the audience while they came on stage and started mayhem. It was simply awesome. The band showed a lot of energy, playing songs covering their whole discography. “Being Nothing”, “Scathing”, “Hero” are some of them while lot of the songs were coming out from their latest release “Wearing A Martyr’s Crown” with the semi-titled song that recently made a video of, to be the highlight of the show. Guess what. I’m going to talk about the vocalist again. He isn’t just good in signing, but he’s funny too, making the entire show very enjoyable. Another thing worth mentioning was the presence of former Nighrage guitarist Gus G in the audience, leading to something that left us all surprised in a good way: Nightrage covered part of a Firewind song, dedicated to him. They finished with the song “Tremor”, receiving tons of applaud.

Finally, there was the last act of the night, Septic Flesh. Background scenery, dim lights and here they come. Seth speaks a few words and the opening track “Unbeliever” starts the show. They continued with a few more old songs and then switched to the highly acclaimed “Communion” songs,  with only “Red Code Cult” and “Sumerian Daemon” breaking the continuity of Communion. The whole playlist was well received by the audience, creating a constant pandemonium in the pit. Septic Flesh capped the performance with a very professional show and lots of energy. However, I was kind of annoyed by the choice of songs played. It’s not that I don’t like them, but it had been more than a year since I last saw them live, yet the playlist was exactly the same. OK, last time they were promoting their latest album, but now I had been expecting to see more of their old stuff, not just three or four songs.

Finally, a note to the promoters and technicians: the sound was terrible, especially on guitars. If you want to hold a gig of this caliber, you must have appropriate sound support. That however didn’t hold back any of the bands and they did their best to please us. Sorry if you weren’t there, but this gig was very good overall, showing that the Greek metal scene has quality bands and lots to offer.