Ayreon
The Theory Of Everything 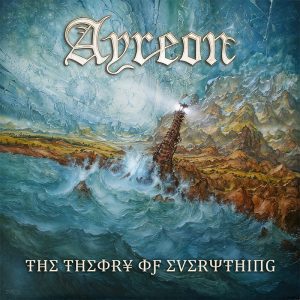 If you are into prog music then you surely know Ayreon. If not, well you’re not of this planet. Ayreon is one of the leading progressive rock/metal bands in the music scene. It’s the brainchild of Arjen Anthony Lucassen, a tall guy from Netherlands, which also happens to be a multi-instrumentalist/producer. He has participated in numerous bands and has also formed “Ambeon”, “Star One”, “Stream Of Passion”, “Guilt Machine”, “Strange Hobby” etc. Throughout his carreer he has collaborated with many guest musicians and vocalists, while Ed Warby has played the drums in most of Ayreon albums.

After some years from the latest full-length album, the fantastic “01011001”, “Ayreon” were put on hold while Lucassen was writing music for other project bands, so it was time for a new full-length album. “The Theory Of Everything” was released in October and as always it’s a progressive metal/rock opera project that features guest singers as voices of the story’s characters, including John Wetton (ex-King Crimson, Asia) as “The Psychiatrist”, Marco Hietala (Nightwish, Tarot) as “The Rival“, Cristina Scabbia (Lacuna Coil) as “The Mother“, JB Christoffersson (Grand Magus) as “The Teacher“, Tommy Karevik (Kamelot) as “The Prodigy”, Sara Squadrani (Ancient Bards) as “The Girl” and Michael Mills (Toehider) as “The Father“.

The lyrics are more realistic than ever, as he moves from sci-fi and aliens stories to a completely different thematology, a real life drama. Musically you could say that is progressive rock with some heavy and symphonic elements and Lucassen himself described the album as “less heavy and more instrumental than 01011001”.

The story consists of four more than 20 minute songs, “Singularity”, “Symmetry”, “Entanglement” and “Unification” that were cut into 42 sections. It’s about a young mathematical genius with a mental disability and how he interacts with the other six characters. As Lucassen pointed out, “A Beautiful Mind” and “Rain Man” movies were inspiration for the lyrics. The wonderful cover art was once again created by Jef Bertels.

Not many things to say about the music. You should hear it to just get a clue of what I’m talking about. Lucassen always delivered quality music and has been evolving from record to record but I think this time he surpassed himself. He was also the producer of the album and Bret Caldas-Lima did the mastering.

If you haven’t heard it yet I’m pretty sure that you will be surprised by the incredible music that he once again has composed and the overall amazing job everyone who has participated in this album has done. It’s a truly epic, melodic and emotional concept album for prog fans.