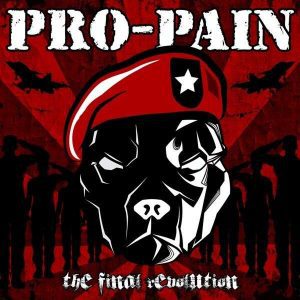 Some people simply never get tired of being creative, never get tired of being theirselves and never get tired to do what they believe and not what others tell them or want to do. Gary Meskil, the leader, bassist and vocalist of Pro-Pain is surely one of them and all I have to say from the very beginning is how much deeply I respect him for his relentless ride in hard music since his days with Crumbsuckers. A little more than twenty years ago he released his first album with Pro-Pain, ‘’Foul Taste Of Freedom’’ and right now we are talking about the fourteenth (!) full-length release of the band (which makes it if my math is correct, one and a half album every two years). What is even greater than this, is the fact that Pro-Pain have never released a crappy album if we consider the whole work done for each one.

With fourteen albums in their back, it is logical that some of the fans may like some more and some others not at all, but since I’ve started listening to them, I never said ‘’this is shit’’. Right now, we seem to have the band in a period of pure shape and inspiration, as the new album ‘’The Final Revolution’’ seems to continue from where the previous one ‘’Straight To The Dome’’ stopped, which also happened to be a very good album, one of the band’s best the latest years. ‘’The Final Revolution’’ is the least equal, if not better than its predecessor and in less than thirty seven minutes, you’ll find more than thirty seven ways to bounce your whole body on the never-ending groove the band produces. The skill to compose good music may come and go sometimes, but the skill to prove who you are without needing to, is something which you’re born with.

‘’Deathwish’’ is an amazing Pro-Pain album opener, as it always happens with each track with this role in every album of them. Fast, furious and grooving, it paves the way for the next tracks to follow in the same vain. It’s always up to the listener which ones he’ll choose, but I think this time we have a real killer in this album, being ‘’One Shot, One Kill’’ that will become not only a fan favourite, but also a live essence for their shows. Not to mention the addictive ones ‘’Problem Reaction Solution’’ with the feeling that fists come and go around you and despite how much you try, you’ll eventually meet with them and of course, ‘’Southbound’’ and the title track will make you wonder how and where they find all this energy after so much years and with more than a dozen albums behind them.

The answer may be simplier than we imagine, as Pro-Pain were always minimal in their music’s approach. With the feeling ‘’less is more’’ and without any need to play more complex than required, they have managed to become really beloved to the metal crowd, especially after getting the music much more hardened since ‘’Act Of God’’ in 1999. Not that the hardcore fans don’t love them, but the band (alongside Biohazard back in the day) was facing rejection by a large part of the hardcore fans and scene for becoming too connected with the metal scene. Bollocks as always, as the attitude doesn’t come from around the stage but always ON the stage and no matter how much people try to put genres next to each band, fans HAVE to continue enjoying music, even if it sometime becomes a little more ‘’flexible’’ or ‘’alternate’’, compared to what everyone is used to through the years.

Since it’s no time for what music is and how everyone understands it and deals with it, I’ll stick with the quality Pro-Pain once more offered with this album and I hope that many bands out there would be like them. Hardcore or metal, all or none of the above, Pro-Pain are the perfect example of how you can survive the bollocks said about you with simply ignoring them and continue being yourself without need to lower your standards. Well done to Gary Meskil and his companions for releasing a great album and I think it’s about time seeing them live once again, where they’ll play about thirty songs in less than eighty minutes and we’ll still be counting the bullets thrown around us. Last but not least, I hope the line-up will become steady and I think they’ll release an even better album if they go on like this.