Inquisition
Obscure Verses For The Multiverse 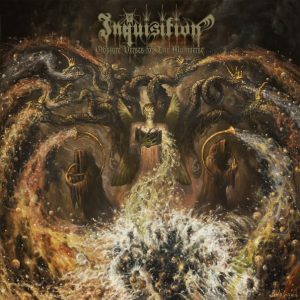 Two years have passed since we last heard from the Colombian duo, Inquisition. The band is known for their stable career in black metal, creating good records since the nineties and never losing their nerve and quality throughout the years. Inquisition is not the kind of band which will release something just to get something on the surface, but they will release new material when they actually think they have created something worth-listening. Their latest release is titled ‘Obscure Verses For The Multiverse’, a title which only creates questions about what we are about to hear but also gives us a smile into our faces, knowing that Inquisition always tend to leave us speechless with those lyrical themes.

All the records of the band are kind of the same music pattern. Black metal, with old-school riffs and vocals, but a bit more complex from what we will hear from an old-school band for example. The lyrical themes were mostly about Satanism or spirituality, but as the band has grown older, Inquisition mostly refers to spirituality, the cosmos and nature of course, the great mother of the universe. The band’s pagan roots are totally visible, as well as the wisdom in writing anthems for our universe.

Unlikely the harshness in the music and vocals, the band has gone less aggressive in this one. The main goal is less blasting in drums, more mid-tempo parts. However, don’t expect a lighter record, as the band managed to sound more blackened than ever, despite the presence of slower music parts. Dagon’s voice is brutal and killing as always, following the flow of the songs just like satan in the dance of the dead. ‘Joined By Dark Matter, Repelled By Dark Energy’ is a fair example of the lighter black metal music patterns the band is using to create music. They sound like doom metal combined with black metal vocals and black metal blasts on the drum parts.

‘Arrival of Eons After’, ‘Infinite Interstellar Genocide’ and ‘Force of the Floating Tomb’ are just some of the songs where the band plays fast, aggressive black metal, reminding me of those first records of Inquisition. I like the groovier side of them, the one influenced by Burzum but I must say, I miss those aggressive drum’s blasting all over the songs. ‘Spiritual Plasma Evocation’ combines all those elements together, a totally mind-blowing song.

‘Obscure Verses Of The Multiverse’ is a natural continuation of the mature Inquisition, another milestone of their stable career. A black metal fan will find this album really good, without it to be explosive and renewing. Inquisition celebrates without many fireworks in the sky above them, but they have for sure wisdom to pass along their music.