A Storm Of Light
Nations To Flames 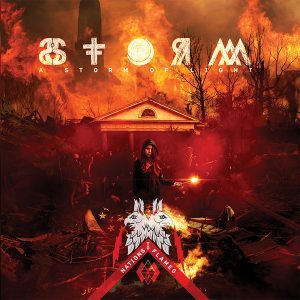 The US post-metal band A Storm Of Light continues their music exhibition and delivers another hit album this year.  With numerous records and releases, after the success of ‘As the Valley of Death Becomes Us, Our Silver Memories Fade’, the band goals into another successful record and creates ‘Nations to Flames’. As the title reveals, the record claims to be critical and politically oriented, a criticism in social and political reality.  As a result, the band takes a positive advantage, before even hearing the record, just by reading the lyrics. However, I wish the whole result would be as good as the philosophy of the record, but it isn’t.

In general, we can say that the tracks all together sound familiar. This is because they are all build under a specific music structure. We have pompous, commanding drum lines along with heavy groovy guitars. The result steps between sludge metal and post metal. The vocals are deep but faded; the whole slow-paced music with those repeated faded vocals get you extremely tired. We can describe ‘Nations to Flames’ an atmospheric record, but doesn’t excite the listener, even if you like sludge metal very much.

As I’ve stated before, the lyrics are mostly about social matters and the record is bonded with revolutionary themes. ‘Fall’, ‘Dead Flags’, ‘Lifeless’, all those songs claim the rise of a new world, a better one and most authentic. ‘The Year One’ and ‘Soothsayer’ are instrumental tracks. The first one is very good too. It is atmospheric, dynamic and sludge-slow. As far as the guitar riffs are concerned, they are kind of lost into the whole music, which sounds like a mass the most times. I can understand what the band tried to accomplish in the record, but they needed a different approach, both in vocals and in sound engineering.

‘Nations to Flames’ is not the album I expected to hear at first. I demanded more by A Storm of Light, something better than their usual sound and totally more significant. The songs themselves are not bad, but along with the high guitar gain, the digitally changed vocals and the work done in the band’s sound, they get repeated and forgettable. Nothing special this time from A storm of Light.