Fueled By Fire
Trapped In Perdition 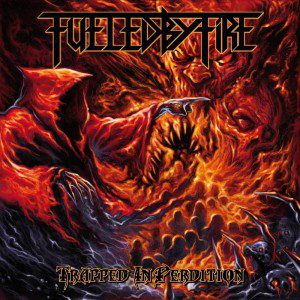 This is a fantastic year for the new breed of thrash (Evile, Gama Bomb, Havok, Violator, Exarsis, Pasadena Napalm Division, Ultra-Violence) as well as for the old school (Accuser, Sodom, Morbid Saint) since they’ve either come back with live shows (like Morbid Saint) or made some amazing records. This time around another new band that surprised me with its progress: Fueled By Fire. I have to be honest, I didn’t really think highly of this band since “Spread The Fire” (2006) wasn’t something setting itself apart from the rest in terms of musicianship hence I didn’t pay much attention to them.

Then came the album “Plunging Into Darkness” (2010) and the tour with Kreator, Morbid Angel and Nile last November that made me check out these guys once more. What I faced was a great mixture of Exodus, Dark Angel (vocal-wise) and a bit of Sepultura devastating my ear drums. The vocals were like that on the first album it’s just that they’ve greatly improved over time. Solid drums, ripping fast riffs, what more could a Thrasher ask for? The answer comes this year with “Trapped In Perdition“.

Opening track called “Catastrophe” kicks in showing a strong Death metal vibe present throughout the record (mostly bands like Death, Obituary and Massacre) with some atmospheric breaks here and there (especially in the chorus) as well as great midtempo/groovy parts and solos showing their high musicianship level. A purely Death metal intro leads us to the ripping “Suffering Entities” balancing between midtempo headbanging riffage and razor sharp Thrash riffage including great soloing and the ear piercing screams of RIck Rangel sounding like a mixture of Dark Angel and legendary Demolition Hammer.

An amazing harmony intro comes up next to begin “Forsaken Deity” an overall headbanging mid tempo track showing some great drum work done as well as a kick ass slow solo reminiscent of Sepultura and Death (Human era). “Profane Path” starts off as something off Slayer’s “Hell Awaits”, ripping fast then slowing down in the middle before the final fast part where the well-known Erik Rutan of Hate Eternal delivers an amazing fast yet melodic solo. One of my personal favorites.

A palm muted technical intro brings “Defaced Mortality” followed by some more top notch soloing (reminded me of Morbid Angel) only to turn into a Thrash tornado built to destroy including a headbanging chorus and some slow breaks as the acoustic one in the middle before the Thrash-fest continues. “Rotten Creation” comes in like a storm stopping for a midtempo break only to start destroying again including a great aggressive chorus and tremolo soloing. I can imagine bodies flying in the crowd during this song on live shows.

Next we have the must-headbang-now intro of “Pharmaceutical Extermination” showing a bit of Testament influence on the guitar work, being a track balanced between slow and fast tempo. “Symbolic Slaying” starts off midtempo only to create chaos (in our ears and live shows as well) after a slow tremolo solo coming back to the original speed just for the chorus. The final track of the record called “Obliteration” makes us headbang slowly before whipping us into a frenzy making the 2 legends of LA proud (Slayer, Dark Angel) ending with a headbanging riff and a sinister melody leading to the album outro entitled “Abeyant Future“.

There is also another ripping track as a bonus called “Depiction Of Demise” showing some stop-and-go riffage to the above described Fueled By Fire repertoir. Fueled By Fire managed to progress even more with time and release their best album so far. Well done guys and good luck on tour with Suicidal Angels!