Another great package came to Greece, offering four groups of different generations representing the best possible way thrash and death metal. Kreator from Germany and American bands Morbid Angel and Nile were already a great deal, add also Fueled By Fire which show what the new thrash generation is about and you had everything you wanted for a rather reasonable price in these difficult times we live. The result was about 1300 people showing up and supporting this event, something showing that the fans were really looking forward to seeing it. Because of a delay, the gig started at 9 o’clock, which was a little miracle regarding the conditions before the arrival of the bands and the equipment they carried. 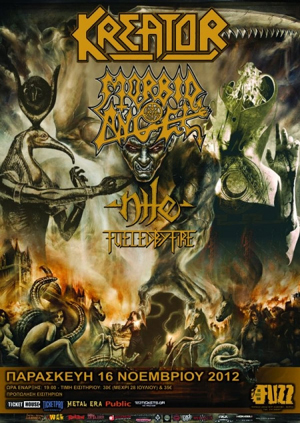 Nile were the first to open the gig because of this delay, so that the primary bands would play on schedule and Fueled By Fire would show up last. Starting with ”Sacrifice Unto Sebek” and ”Defiling The Gates Of Ishtar”, the band is once again in tremendous shape and drummer George Kollias not only plays at home, but manages to give the fans a spectacular show with his unreachable drum skills. ”Kafrir!” declares that there is no god but the one real god and ”Hittite Dung Incantation” close a chapter where somehow older tracks are played. The new ”Enduring The Eternal Molestation Of Flame” shows that ”At The Gate Of Sethu” is an album which can offer some great tracks for a gig.

”Sarcophagus” lowers the tempos for a while until ”The Inevitable Degradation Of Flesh” gives us another new taste of Nile era 2012. ”Ithyphallic” was not part of the band’s setlist in this tour and it was a good welcoming addition before they end with ”Black Seeds Of Vengeance” as they always do the last years. Nile gave a great performance once again and were lucky to play for the biggest audience they’ve had in Greece so far. They deserved it, even though they didn’t gather all fans on their own. Karl Sanders and Dallas Toller-Wade always change riffs, solos and growls the same easy as they leave space for each other. New bassist Todd Ellis is also a great heabanger apart being a great player and George Kollias leaves no space for comments with his ongoing evolution. A bright future lies ahead for Nile, they still have a lot to give.

Morbid Angel was a case that everyone faced with fear before the gig. Their latest flop ”Illud Divinum Insanus” raised such controversy and made their once rather strong fan base scatter at once. What we saw was a suprisingly professional and succesful berformance that few of us expected (not to say noone). ”Immortal Rites”, ”Fall From Grace” and ”Rapture” was an ideal opening showing that the once steady and pain giving deathsters were back alive and kicking (too bad they didn’t play ”Dominate” after these three to send us to hell). ”Pain Divine” was the first special addition to the set in the place of ”Sworn To The Black” and ”Maze Of Torment” promises a great setlist. The band played the two good tracks of their latest shame, ”Existo Vulgore” and ”Nevermore” but that was just a break from old school classics that followed.

”Lord Of All Fevers And Plague” and ”Chapel Of Ghouls” (which they always played last) show that a great encore is going to follow. After a short break, ”Dawn Of The Angry” raises hell (second special addition in place of ”Blood On My Hands”) and ”Where The Slime Live” represent ”Domination”. The sound got a little better during the show but was not the one the fans and the band would like. A Tucker era track is played, ”Bil Ur Sag”, which surprised us all, as well as the ending with ”God Of Emptiness” at first and ”World Of Shit (The Promised Land)” at the end. A nominal performance by Morbid Angel which closed many mouths (mine included) that night. A part of the shame was erased but until they make a new album worthy of their heavy legacy, dispute will always follow those who haven’t seen them. Destructhor on guitarts and especially Tim Yeung on drums kick serious ass though and the gaps of Erik Rutan and Pete Sandoval doesn’t so at all.

Kreator is a guaranteed case for gigs, none who’s seen them has left complaining, they always change the setlist but still including the classics and after the intro with Johnny Cash’s version of ”Personal Jesus”, ”Phantom Antichrist” with ”From Flood Into Fire” show how the new Kreator sound like. ”Enemy Of God” with ”Phobia” set Fuzz Club on fire and ”Hordes Of Chaos” explodes the fans to pieces, ”Civilization Collapse” and ”Voices Of The Dead” add some more quantity and quality and the good part of their set hasn’t started yet. Mille Petrozza states that Kreator feel like coming home when they play in Greece, he tells us that the atmosphere is rather aggressive because of the riots we have and ”Extreme Aggression” is the hint everyone expects to show their energy. Large moshpits are created and the fans are on fire. ”People Of The Lie” starts at the end of the previous track and the fans are out of control fully losing their minds. None can blame them.

”Death To The World” prepares the ground for some more classics, the intro of ”Coma Of Souls” is played and just when we’re about to lose our minds, ”Endless Pain” is starting and amazes everyone. ”Pleasure To Kill” straight after is the joy of the old school maniacs and Mille turns red like he’s living every lyric to the bone. A little break and the intro of ”The Patriarch” shows that ”Violent Revolution” is going to follow. EVERYONE is singing ’til the end and ”United In Hate” is the last break before the final massacre which starts with ”Betrayer” (dedicated to all politicians by Mille) and of course, ”Flag Of Hate” and ”Tormentor” which Mille sings with the Greek flag worn around his throat. Another spectacular Kreator performance in Greece ends and the band is very happy to witness the absolute recognition by all the fans in the club. Mille told us to wait and see Fueled By Fire, most of the fans didn’t listen to him, they lost.

Fueled By Fire played for some hundreds of fans and proved why they are a part of this tour. Great riffs and solos, great presence on the scene, to play after Kreator would be like suicide but they didn’t give a fuck. This makes them a big band in my conscience and for half an hour, they didn’t care what we had seen but played like the gig hadn’t started. The setlist included six songs only but were enough to show that this band is maybe the best of the new thrash wave. They started with ”Rising From Beneath” and continued with ”Within The Abyss”, ”Unidentified Remains”, ”Dreams Of Terror”, ”Thrash Is Back” (with such bands, I’ll start believing strongly in this) and closed with ”Eye Of The Demon”. In overall, the gig was a success and first of all we must praise the absolutely great organisation plus the crew that did the best they could for the bands to start as less delayed as they could. 2012 closed with a great gig, I don’t know if we’ll have such in 2013, so let’s enjoy this one a little more than usually.