Mustasch
Thank You for The Demon 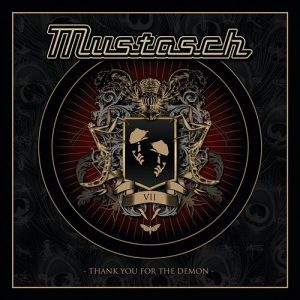 Mustasch’s hard rock music has become largely famous in Sweden and Europe especially. The band’s career started with their first record, ‘Above All’, back in 2002. Since then, seven more records have lifted the band to higher grounds, higher than ever, and since then Mustasch has been treated as one of the hottest names in hard rock music scene. ‘Thank You For The Demon’ is the eighth full-length record for Mustasch, in a fourteen year career! Will the band continue their good record row or is the continuation broken, and the inspiration low? Let’s find out!

With the party mood on, the band recorded nine songs, in approximately forty-five minutes of pure hard rock music. The sound is excellent, the production too, just like it should be. However, the music the Mustasch elaborated with for this record, the songs they created, didn’t seem to impress me this time, in opposition with other webzine’s and magazine’s editors. In order to support my opinion, I reveal my thoughts for ‘Thank You For The Demon’.

The band uses guitar riffs in a way which approaches heavy metal in many ways. For example, the record starts with ‘Feared And Hated’, and the modern approach to catchy vocal lines seems to be a wrong one when it is combined with the effort to sound heavy as well. The high-pitched vocals, may sound overwhelmed in many songs from this record, such in the first’s song intro. ‘ I Hate to Dance’ is another fair example of my opposition. I totally dislike the way the song tries to be a groovy and dancing one. Just like the song states in the lyrics, our music differs with the dancing ones, in many ways, but especially in our philosophy. Making songs just to aim for a ranging audience is something wrong.

There are many rocking and many acoustic songs in the disc. Acoustic parts can be found in ‘Thank You For The Demon’, ‘All My Life’ (which is a ballad) and in ‘Don’t Want to Be Who I Am’. The electric parts touch the stoner rock music genre, however they remain hard rock ones. Songs like ‘From Euphoria To Dystopia’ or ‘The Mauler’ are aggressive and rocking. On the first one we can find influence by Iron Maiden in the guitar riffs, or the NWOBHM scene generally. From the whole record, my favorite moment and the strongest generally, is the song ‘Thank You for the Demon’. This song reflects what in my opinion the whole record should be; mid-tempo but explosive songs, with parts that make the vocal lines take over and dominate and heavy break-downs as well.

Considering all the above, the overcome is not that great for Mustasch. The band could do a better job working on the ideas a bit more, rather than making the record now. The great mixing and mastering of the record lifted the quantity of the songs a bit higher, but the quality of the sound itself does not prove that ‘Thank You For the Demon’ is the record it should be.