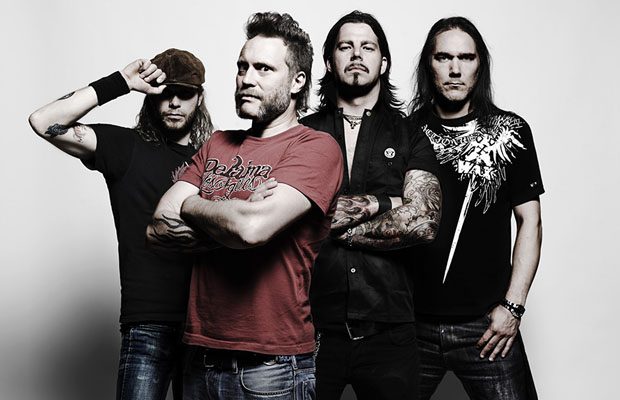 Gain Music Entertainment has announced the worldwide release of a new album from Swedish rockers MUSTASCH. The band has been working all summer to record new songs and only left the studio to play as many festivals as possible.

MUSTASCH‘s latest album, “Sounds Like Hell, Looks Like Heaven”, was released in North America on February 26 via Metalville Records. The CD, which was released in Sweden in February 2012 via Gain Music Entertainment, was produced by guitarist/vocalist Ralf Gyllenhammar and was mixed by Stefan Glaumann (RAMMSTEIN, PARADISE LOST, WITHIN TEMPTATION). The cover artwork was created by Martin Westerstrand (LILLASYSTER singer).

MUSTASCH in 2011 parted ways with drummer Danne McKenzie due to personal differences and replaced him with Jejo Perkovic (INFINITE MASS, CANDLEMASS, BEAR QUARTET).

In early 2011, MUSTASCH celebrated its 10th anniversary with the release of “The New Sound Of The True Best”, a compilation album featuring re-recorded versions of some of the band’s best songs along with a new track, “Angels Share”. That album will also receive a North American release on February 26 via Metalville.