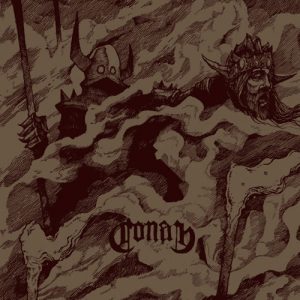 Conan, the UK’s most famous sludge trio has returned. With a great record and a few great EP’s and split, the band gained publicity and the interest of a large fan base who enjoys massive and head-breaking, slow, sludge songs. The band has joined force with Bongripper the latest year, creating a split that promoted the band’s music, even though the song representing Conan was not as good as the other side of the disc. ‘Blood Eagle’ has been released this year, only to shake the things up again, and Conan managed to achieve it, without creating something as solid and interesting as expected.

Trying to describe Conan’s new record at the moment, I would say that ‘Blood Eagle’ is a classic sludge record. By using the word classic I mean that the band is using a repetitive song recipe, used by many bands before them. The record is nothing but heavy, down-tuned, guitar riffs, dynamic drumming and choir, harsh vocals, which tend to remind me the battle cry of soldiers.

The record could sound appealing to someone not experienced with the sludge sound or someone who listens to the record once in a while. But if someone wants to take a closer look to the music the band created and listens to the record all over again, ‘Blood Eagle’ sounds like a mass after a while, without something to be really bad, but not really good as well. In fact the record cannot be characterized as bad but neither as a good one, and that’s something not ideal for a band like Conan, at this point of their music career. To be honest, I always chose to be suspicious with new bands rather than glorify them from the very beginning.

‘Blood Eagle’ can be groovy and ambient at the same time. The songs are mystical and aggressive in their own way. However, it could be more significant, with changes and points that would keep our interest on the line. ‘Altar of Grief’ for example is a song that could be ten times better (it contains some great original ideas itself). Lacking the change and keeping the same music pattern for all song long, as it is predicted, destroys the good original ideas. On the other hand, I liked the sound this band has embraced for this record. ‘Crown of Talons’ or ‘Gravity Chasm’, for instance, get more compelling performed with the specific deep and extra-heavy sound.

In general, Conan should have worked more and aim to give birth into something more original, more colorful. With mediocre vocals and music ideas, ‘Blood Eagle’ is not the album it should be.