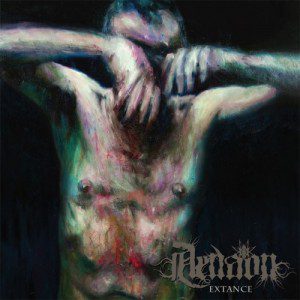 When Aenaon began their music journey, ten years before, nobody believed the band was something that would become something the exceptional. Year by year the band gained fans, especially with the release of their split with Satanochio and the release of their first record ‘Cendres Et Sang’, released back in 2011. The band was part of the black metal scene, using however a lot of avant- garde elements in their music. This year, with ‘Extance’, the band became one of the most-loving ones for me and all those who seek innovation in black metal. This review is about to explain you the reasons why.

Whoever seeks something the plain and stable, won’t find it into this record. ‘Extance’ is a twisted record, with a lot of changes and all kind of instruments in it (yes, even wind instruments). The band uses some classic black metal moments in the songs, but enriches them with many special melodies, or vocals which make the songs even better and addictive. Yes, ‘ Extance’ is addictive and just like the newest Hail Spirit Noir one, it came to stay!

The vocals are brutal, blood-thirsty and perfectly combined with the evil, black metal guitar all along the songs. The music is dynamic, extreme, with a lot of avant-garde and fantastic melodies on the top. We can hear any kind of keyboard background and there are moments where I can hear saxophones too like in ‘Funeral Blues’ and ‘Deathtrip Chronicle’ for instance. This strange craft of black metal popping out Aenaon’s fantasy and mind is very interesting and should be an example for all those who complain about music’s deadlock but however criticize negatively everything that tends to break the old-school recipes for black metal.

‘Grau Diva’ and whenever in this record I hear those 70’s prog rock keyboards tend to remind me of Hail Spirit Noir and all those bands who draw inspiration from the specific decade. ‘Der Mude Tod’ is another piece of mind-blowing work, especially in the vocal lines and the blasting drums which follow up. ‘Algernon’s Decadence’ and ‘The First Act’ contain some beautiful piano parts which help with the mystical and ethereal feeling the record has.

Another special part of this record is the many guest appearances especially in the parts of the vocals. As the band mentions in their interviews, we have guest appearances by Mirai Kawashima (Sigh), Sindre Nedland (In Vain, Funeral), Harris ( Hail Spirit Noir) and Tania ( Universe217). The song featuring Tania in it, the song titled ‘Funeral Blues’ is my personal favorite. I can’t imagine how it may sound with Tania on stage. It would be an awesome experience to watch it hear it live sometime.

I recommend the record to everyone and it is surely one of the best releases this year until now. I try hard but I can’t find another band who approaches black metal as Aenaon and I am happy I had the chance to review the record and listen to it one month long and many many many times on repeat.