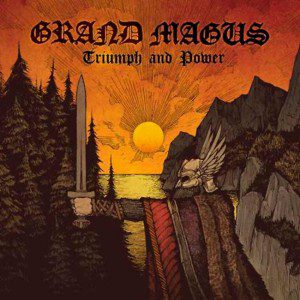 Grand Magus had already shown their intentions of cleaning up their sound from their previous release, “The Hunt”. Well, soundwise, I believe that the phrase “The little brother of Triumph of steel” describes “Triumph and Power” quite accurately. Here we have a textbook epic metal record with all the pros and cons it comes with.

For instance, some songs are so unbelievable catchy it’s ridiculous. Take for example “Dominator” or the absolute star of this release, “The Hammer Will Bite”, which you only need to listen once to get addicted to it and hum it everywhere you go, repeating JB’s vocal lines and lyrics on your mind. Then we have the amazing refrains of “The Naked And The Dead” or “Fight” (Sons of Odin much, JB?) and the powerful same titled song, all of these songs covering the record with a strong scent of American epic metal influences, such as Virgin Steele and 90’s-00’s Manowar. Then comes the marriage with the European influences, with the clean intros on “Steel Versus Steel”, “On Hooves of Gold”, “Ymer” and the choir in “Holmgang” giving you a strong spine chill by reminding you of the first time you listened to the epic era of Bathory. Moreover, the whole album is characterized by an unmistakable feeling of 80’s traditional heavy metal, in the likes of Accept or Saxon, with the steady and rhythmic verse riff being the glue that holds the whole song together, leading to the catch refrain.

However, that method (which in general is common in Grand Magus’s albums) is the element that dooms this album to be “just a very good album”, while it had all the potential to be legendary. There were many times that I got this feeling that something truly EPIC was about to follow one of the exceptional Bathory-like intros but in almost all cases what followed was a riff that was plain good, not bad at all of course, that is why this is a very nice album, yet just a decent verse that we definitely have heard many like it in the past. That is exactly why I used the term “Textbook epic metal record”, because many parts in the songs feel typical, just about enough to entertain you till the refrain or the solo kicks in, while in the beginning there was a lurking feeling that you are about to be amazed! Grand Magus fall into the trap of safety, the trap in which many classic heavy metal bands have fallen because they envisioned some of their songs as fit for concert or bars, while they could have delivered something extravagant that could write history.

All in all, I know that when I feel the need for some strong epic metal I will always choose certain songs from “Triumph and Power”, yet I will also feel a small bitterness about what this release could have been in epic metal history.