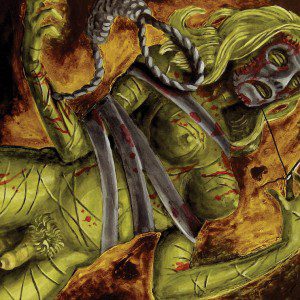 Another sludge metal band returned this year with a record (along with Mantar and Indian). This time, the band I’m referring to is Lord Mantis, from Chicago. The band is known for their collaboration with Indian’s guitarist and vocalist, Dylan O’Toole. Lord Mantis came back after a great record (‘Pervetor’) with their third full-length, ‘Death Mask’. The record’s cover is as rotten and shocking as their previous one, presenting a corpse of a woman with a penis. Nice one!

For music, the record flows as expected from a band like Lord Mantis. The songs are a mixture of hardcore punk with sludge metal. There are screaming vocals and sharp guitar riffs, strongly reminding me of the sludge metal pioneers Eyehategod. There are a few blackened points in the record, especially in the blasting drums, however I tend to believe that ‘Death Mask’ is more of a primitive sludge record rather than a blackened sludge one. However, there aren’t much ambient parts in the record and the songs are just as destructive as we want them to be.

‘Body Choke’ is the opening song and my favorite one. It kicks off with ambient drumming till the band progressives into a blackened craft of doom metal and sludge. Along with ‘Coil’ ( a song with digital vocals) and ‘Possession Prayer’, are considered as the slow songs of the record, while ‘Death Mask’ and ‘Negative Birth’ contain the most aggressive riffs the band composed for this record. In a record with seven songs, it is a negative fact to contain two songs which I consider as fillers. I am referring to ‘You Will Gag For This Fix’ and ‘Possession Prayer’. The first one contains some ambient, keys parts while ‘Possession Prayer’ may be a complete song, but it is complex and buffed with the sound effects and the fillers.

The sound is close to the black metal and sludge ones, reminding me the sound of the recent Indian record. Generally speaking, I must keep in notice that the record is amusing. Without being something extra- unordinary or a masterpiece, ‘Death Mask’ can be considered as a good record, a record which most of the sludge metal fans will enjoy and listen to for a long time. The band surely needs to work more of their ideas and the music they create, in order to compose a record which is one hundred percent perfect.

Lord Mantis offered once more a great mixture of metal and hardcore, a record which contains not only doom riffs and black metal influenced melodies, but screaming, punk vocals, all bonded together as a raw and bloody outcome. The record is totally recommended to the sludge metal fans.